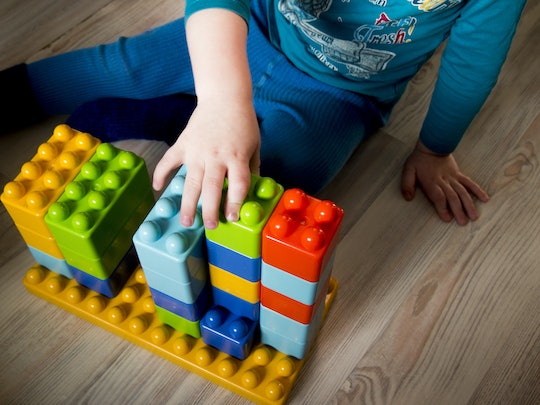 For parents, decision fatigue is a real thing. From sun-up (or earlier, if you have my kids) to sun-down, you're constantly making decisions for the little people in your life with the intentions of doing what's best. The choices in everything — the clothes they wear, the food they eat, the toys they play with — are plentiful. Especially that last one. But as it turns out, you don't have to make too many decisions when it comes to their playthings. There's a reason why simple toys are better and it's going to make you rethink all of your toy shopping.

"While electronic toys can be compelling and educational with their lights, sounds, letters, numbers, and moving images, they don't foster two important aspects of play for young children: imagination and connection," Dr. Sharon Saline, Psy.D., clinical psychologist, tells Romper. "Young children benefit from the neurological growth that imaginary play with simple toys offers them." With simple toys, children learn to push their thinking creatively, explore and experiment with their bodies and minds, and practice playing different roles. "These moments help them integrate observations from daily life into new, creative ideas and behaviors," she explains. Basically, instead of following paths that other people have designed in computer or video games, Saline notes that children are able to forge their own territory with simple toys.

Simple toys, such as balls, building blocks, clay and crayons are usually much healthier for children than the electronic/educational toys, according to a study done by the Infant Research Lab at Temple University. The overarching principle is that children are creative problem-solvers, noted lead researcher Kathy Hirsh-Pasek. "Children are discoverers; they’re active," she said. With simple toys, your child gets to use her imagination to build and develop. Instead of the toy telling your child what to do, your child commands the toy. Simple toys promote independence, creativity, critical thinking, and imagination. The more the toy does, the less your child is doing — both physically and mentally.

As Saline notes, through using and manipulating simple toys, kids are building confidence through trial and error, embracing the freedom of their ideas, and developing neural pathways that grow creative minds. "Simple toys provide a foundation for all kinds of complicated thinking later on," Saline tells Romper.

Simple toys also promote essential person-to-person connections because children have to play with each other, Saline says. Kids learn vital social skills by interacting with others — this ultimately builds their emotional intelligence and ability to problem solve. They also pick up ways of reading how another person is feeling and how to respond, which is essential to building empathy and strong intrapersonal skills. "These are critical elements of child development that become more important as children mature, but also become harder to teach and learn if missed early on," Saline notes.

In fact, as Educational Consultant and Special Needs Advocate Ilene B. Miller, M.S. Ed., tells Romper, "Simple toys have sustained themselves through the years for one very important reason, and that is because they work. They work and help with countless developmental milestones that a child will meet and, ultimately, surpass."

While your child will likely learn academic skills throughout their life, simple toys teach skills that often become more difficult to learn later on. As Saline says, "The magic of the child's imagination and the critical thinking that imagination spurs is a vital, but fleeting, stage of development."

Children have a natural inclination towards creativity, discovery, and exploration — they are curious and absorb everything around them. Simple toys work with those natural inclinations in order to promote natural growth and development through self-learning. Instead of instant gratification, children learn things like patience, cause and effect, and persistence. Essentially, with simple toys, children can teach themselves how a myriad of things work and why they work the way they do. And, if simple toys make your job easier as a parent, why not give them a shot?