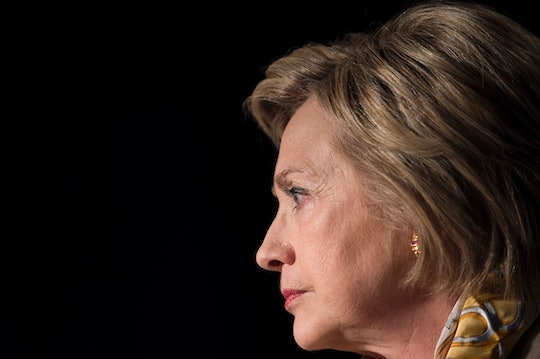 Why Some Women Aren't Voting For Hillary Clinton, Even Though They Want To

If there is one thing the Hillary Clinton team seems to be taking for granted, it's that women of all ages and races will vote for her just because she's a woman. Leading up to the Democratic convention, her campaign seems to be coasting by on the idea that voters will turn out for her not just because she is female but because she is a female who has been living establishment politics since, well, forever. But even as she took the New York primary by a landslide on Tuesday, there are many women who aren't voting for Hillary Clinton, even though they wish they could. I am one of those women.

More Like This
Nobody Wants To Raise A “Karen” — Literally
20 Candid Photos Of Queen Elizabeth With U.S. Presidents Over The Years
25 Great Sci-Fi Movies To Watch As A Family
Angela Kinsey's Daughter Dressed As Her Character From 'The Office' & Wow, The Sass!

It's bad strategy to think that women will vote for a woman just because she has ovaries. If that were the case, former Alaska governor Sarah Palin would have been widely accepted as a viable vice presidential candidate in 2008. (We all know how that went.) As a former Secretary of State, Clinton is running on experience and Washington D.C. know-how. But experience, unfortunately, is not enough in this election cycle. That's the rub for women who want to vote for Hillary. She's more than qualified for the gig. But she's so qualified and ingrained in the political system that it's hard to see what else she has to offer.

We're voting in a post-Obama "hope and change" election cycle. Some of the candidates, like Vermont Sen. Bernie Sanders and Republican frontrunner Donald Trump are talking ideology and it's hard to see how a candidate like Clinton can fit in when it comes to that kind of political fervor. Even as she wins states, like New York on Tuesday, it's more of a collective shrug among some women than anything else.

And a lot of voters just don't like her. It's not because she's a woman but because she is a Clinton. I voted in the New York primary on Tuesday and found myself torn as I hovered over the ballot. If you're a liberal, in any sense of the word, voting for Vermont Sen. Bernie Sanders is a nice shot in the dark. Why not, right? As a human with a lot of student loans and some health insurance needs— Sanders' politics would benefit me. While waiting in line to vote, I heard two older women in Brooklyn debating their vote ahead of me, too. They were talking about public housing and some local economic woes. They were the same things I was tossing around in my head as I waited, alone, deciding if I should Instagram my "I Voted" sticker. (I didn't.)

Race, age, and gender weren't factors. It was that it felt icky to vote for a woman who might not stick around when times got tough. It was like all of us in line waiting to vote in the Democratic primary were choosing a movie to watch on Netfllix. We couldn't go wrong, but how would we feel afterwards?

Although she took New York by a landslide on Tuesday, she's not the candidate a lot of women feel they can get behind for various reasons. Some feel that she's all about a lot of women's issues only when it's convenient. Although, that's more than other presidential hopefuls can boast. Clinton knows Washington and can do the job, and do it well. But to get some women excited to vote for her? That might take some more effort from her speechwriting team — and maybe a little forgetfulness on the part of voters who might otherwise look at her and vote no.