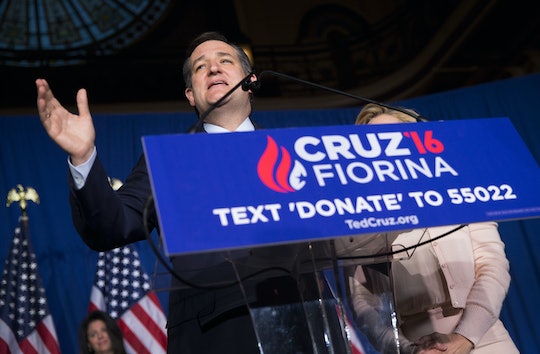 Why Ted Cruz Dropping Out Shouldn’t Worry Anyone

There's no doubt that the news of Sen. Ted Cruz dropping out of the presidential election disappointed a lot of Republicans. After all, according to CNN, Cruz was considered by many to be the party's only hope to keep Donald Trump from clinching the GOP nomination — something that seemed like a pretty horrifying prospect for many right-wing voters (#AnyoneButTrump). But as scary as the prospect of a Donald Trump presidency is, the truth is that, in a lot of ways, a Cruz presidency would have been even worse. In fact, there are some really important reasons why Ted Cruz dropping out shouldn't worry anyone.

As the number of GOP nominees vying for the nomination began to dwindle, and as Trump's outrageous rhetoric began to become even stronger and more absurd, a lot of voters began to look at Cruz as a more reasonable option, the only realistic choice for the right to have a candidate who wouldn't fly off the handle at every opportunity, hurling insults in every direction, and pushing through his plan to build a giant wall and force all Muslims to enter their names into a national registry. But with the world so distracted by Trump's outlandishness, the reality that Cruz is anything but reasonable became an easy fact to overlook. Of course, many voters out there want to stop Trump from becoming the POTUS. But stop to actually evaluate Cruz on his own, separate from Trump, and it becomes pretty clear that the GOP — and the entire country — dodged a pretty big bullet when Cruz announced he was bowing out.

Just by managing to keep his mouth shut a lot more often than Trump, Cruz, oddly, began appearing like a more level-headed — and even a more moderate — choice. But as the Washington Post noted, there is really nothing moderate about Cruz at all. Cruz, after all, comes from the extreme, far-right Tea Party camp, one that would probably make a lot of voters uneasy if it weren't for Trump positioning himself as the more extreme candidate. He is unapologetically evangelistic — even though Trump made headlines for his anti-Muslim stance, Cruz took it one step further, advocating that while he'd also like to block Muslims migrants fleeing Syria, he'd allow Christians. After all, according to Cruz, "there is no meaningful risk of Christians committing acts of terror." (He actually said that.)

As for the Supreme Court's ruling on gay marriage? Cruz called the decision "lawless" and "fundamentally illegitimate," according to The Advocate. And as far as he was concerned, the decision was a vendetta against religious freedom, and a clear example of the government "advancing a secular agenda."

He even went so far as to call the day of the ruling, “some of the darkest 24 hours in our nation’s history,” according to the Washington Post. (Really? Really???).

He's also not exactly a big fan of women or healthcare, either. Cruz is staunchly anti-abortion and anti-contraception, according to Slate, but is perhaps most personally offended by Obamacare, which he once told the Texas Tribune he would "throw [his] body in front of a train to stop." Awesome.

And, probably unsurprisingly at this point, Cruz has also spoken out in favor of good ol' fashioned corporal punishment for children who open their mouths in public. According to Salon, after a young boy heckled him at a rally, shouting "you suck!" Cruz responded by suggesting his parents shouldn't have spared the rod:

One of the things that hopefully someone has told you is that children should actually speak with respect...In my household, when a child behaves that way they get a spanking.

(Tell me again how Cruz is supposedly a moderate?)

But perhaps the most telling concern about Cruz as a presidential candidate? His own party doesn't even really like him. According to Vox, former Speaker of the House John Boehner called Cruz "Lucifer in the flesh," adding,

I have Democrat friends and Republican friends. I get along with almost everyone, but I have never worked with a more miserable son of a bitch in my life.

Of course, the reality for many Republican voters this election is that, well, having to choose between Cruz and Trump wasn't even that great of a choice anyway. And now with Cruz gone, anti-Trump voters are finding themselves in a particularly difficult spot. But for everyone who is seriously afraid of Trump becoming president, keep in mind that if Cruz had won, it probably would have been worse.