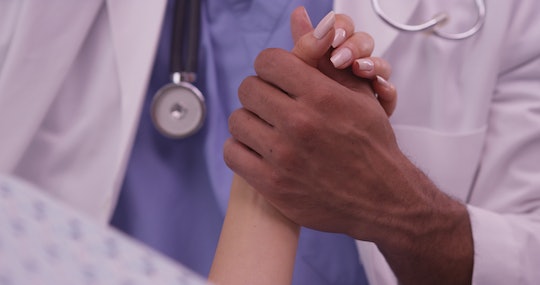 Last week, President Donald Trump took to Twitter to blast Senate Democrats after the Born-Alive Abortion Survivors Protection Act didn't pass. Although Trump accused Democrats of doing nothing to "prevent the killing of newborn infant children" after the vote, this claim couldn't be farther from the truth, as Gretchen Ely, PhD, an Associate Professor of Social Work at the University at Buffalo, explains to Romper. Additionally, Ely broke down the compelling reasons behind the bill's failure.

The Born-Alive Abortion Survivors Protection Act, sponsored by Nebraska Sen. Ben Sasse, a Republican, failed to pass the Senate on Feb. 25 by seven votes, according to The Washington Post. Prior to the vote, Sasse outlined his support for the bill in an op-ed for Fox News, while urging his colleagues to reject "infanticide."

"If my colleagues can’t say that it’s wrong to leave a living, breathing baby, cold and alone on a table, to die of neglect, then they are not only tacitly endorsing infanticide. They are helping to create a society where some people count more than others, and where the vulnerable are always at the mercy of the powerful," he wrote.

The actual bill's language, however, isn't as dramatic or emotionally-charged as Sasse's op-ed, which states, according to Congress' website: "This bill amends the federal criminal code to require any health care practitioner who is present when a child is born alive following an abortion or attempted abortion to: (1) exercise the same degree of care as reasonably provided to any other child born alive at the same gestational age, and (2) ensure that such child is immediately admitted to a hospital."

If found in violation of these parameters, an individual would be "subject to a criminal fine, up to five years in prison, or both," according to the bill.

What's important to note here is there is already legislation in place to protect infants born following a failed abortion attempt, aka the Born-Alive Infants Protection Act. The law, passed in 2002 under President George W. Bush, "extends legal protection to an infant born alive after a failed attempt at induced abortion," according to the website Gov Track.

But there's a major difference between this bill and the Born-Alive Abortion Survivors Protection Act.

Dr. Kristyn Brandi, a board member of Physicians for Reproductive Health, touched on this crucial difference in a statement to Vox, arguing that Sasse's bill is a "stark departure from the 2002 law as it singles out abortion and applies strict new requirements on abortion providers only, with the intent to malign and threaten abortion providers."

So, if there's already a bill in place to protect infants in the rare instances of a birth following a failed abortion, then why did Sasse introduce the legislation in the first place?

"It seems the purpose of proposing this law was to create hype and discomfort, and force people to vote either for or against it," Ely tells Romper. "If someone votes against it, then they can be framed as someone who must be against infants, and if a person votes for it, then they are playing into the hype."

Unfortunately, Ely explains, "it's easy to get people frenzied about this because people generally lack knowledge about later abortions, and the topic makes people uncomfortable."

Ely also brought up the topic of the 2020 elections, stating: "The law being passed would not have technically changed anything, but it does allow for the framing of those voting against it as extremists in preparation for the 2020 elections."

In regards to Sasse and Trump's claims about infanticide, Ely calls their claims "preposterous."

"Infanticide is clearly not something that anyone, Democrat or Republican, supports. This is a very clear line that we can all agree about," she tells Romper. "To suggest that someone voting against the law supports harming an infant is preposterous."

She continues, "However, if there are already laws in existence that prohibit the harm of an infant, then additional laws are unnecessary, which seems to be why some lawmakers voted against it, because those voting against it were taking a stand against the hype of proposing this, not in favor of harm to infants."

Additionally, Ely hopes to reinforce the facts about late-term abortions, which are rare ("of the more than 1 million abortions performed in the United States in 2011, about 12,000, or 1.3% happened after 21 weeks," according to the Guttmacher Institute).

"All states have laws in place that regulate a cut off time for being able to access an elective abortion. Usually this is between 20-24 weeks After this time, which is commonly referred to as 'viability,' a pregnancy can only be terminated for medical reasons," she explains to Romper. "This would mean that there is a medical problem that could or would cause the mother’s death, or a medical problem affecting the pregnancy." She adds:

Examples of this include a wanted pregnancy that has died in utero. When this happens, the mother might want to go ahead and terminate instead of having to carry a deceased pregnancy to term, for possibly weeks, when the mother knows that there is no chance of survival. Imagine how heartbreaking that would be. Another example is a pregnancy where there is some kind of problem with development, such as improperly formed lungs or brain. In that case, the parents might want to terminate rather than carrying that pregnancy any further.

Given these considerations, Ely argues it's important that politicians expand laws for abortion care.

"Even though these cases are rare, they do occur, which is why the option for abortion care in medically extenuating circumstances is so important all the way through pregnancy," she says. "That is why New York expanded their abortion law to include abortion care throughout pregnancy, but after the point of viability, abortions are only allowed if there is risk to the mother or a medical problem with the fetus."

Sadly, Republicans, along with President Trump, have consistently spread misinformation about late-term abortions throughout the years, and it seems like the failed Born-Alive Abortion Survivors Protection Act is just another example of this crusade.

When presented with the facts — like the 2002 law already in place to protect newborns and the realities of late-term abortion — it's reasonable for the public to question the motivations behind the Born-Alive Abortion Survivors Protection Act. Despite Sasse's claims about preventing "infanticide," this seems like another attempt to limit patients' access to necessary medical care.