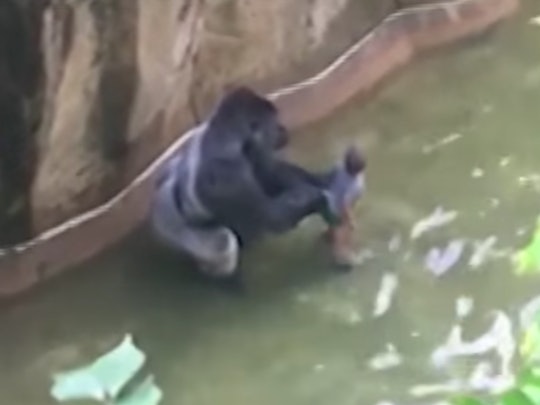 On Saturday, a young boy fell into a gorilla enclosure at the Cincinnati Zoo. In cell phone videos taken by bystanders to the horrific scene, the boy looks tiny next to the 2-ton animal. The zookeepers were faced with a decision, and they had to make it fast. They did: they shot and killed the gorilla to saved the boy. That's quite a story, but, oddly enough, that's not the one that was told when news of the incident spread. Many sources were quick to blame the gorilla's death on the boy's mother, others went so far as to dig into the boy's father's past, which is completely unacceptable. Here's why the criminal record of the father in the Cincinnati Zoo incident is so irrelevant and why thinking it matters is actually offensive.

A prime example: many media outlets have published pieces on the boy's parents that delve into their personalities and their pasts in an attempt to lay the blame. One headline was: "Parents-of-four whose son fell into zoo enclosure sparking killing of Harambe the gorilla as it emerges father has a lengthy criminal history - including kidnap and drug trafficking." Though this piece grants that Dickerson is no longer involved in criminal activity and is in fact a "proud father of four," it also details his "rap sheet" (so-called on Fox & Friends). Zoo officials themselves have said that the parents weren't responsible and should not be held accountable, but many newsreaders took the information about Gregg and Dickerson as evidence of negligence that led to the murder of an endangered animal.

Besides the fact that Dickerson's past is private and irrelevant, most news pieces that refer to it fail to mention that he was not even present at the zoo on Saturday when the incident occurred. That teeny, tiny omission begs the question: then why bring it up at all? He didn't maul a child, nor did he have anything to do with this horrible accident whereby he could have lost his son. How did his past lead to this incident?

The logic breaks down because racism isn't logical. His criminal record proves nothing except that people are quick to judge, and even after years of being a doting father and good citizen, quick to condemn.