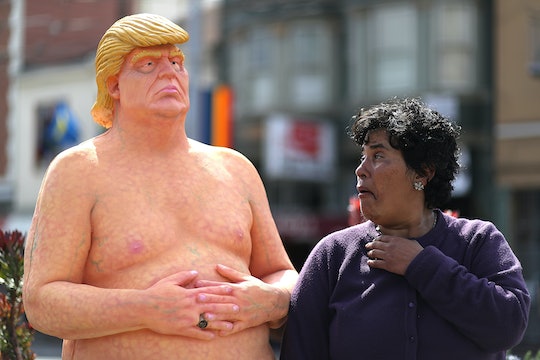 On Thursday, five identically controversial statues of a naked, pot-bellied Donald Trump popped up overnight in multiple cities across the country — San Francisco, Los Angeles, Seattle, Cleveland, and New York. Tourists, commuters, and folks just out for lunch were given the opportunity to snap a photo of the certainly NSFW replica of the GOP presidential nominee. Still — regardless of what you think of The Donald himself, the naked Trump statues might not have been the best idea ever.

Sure, many can argue that Trump deserves it for every hateful comment, unfounded statistic, or nonsensical threat he’s ever uttered, and on many levels, he had it coming. Yes, there is no doubt that Trump’s reputation got him in this situation. But, how might voters and onlookers feel if the artist had different intentions and had perhaps created a nauseating statue of Hillary Clinton or Barack Obama? The project, referred to as "The Emperor Has No Balls" (a play on the Hans Christian Andersen tale, "The Emperor's New Clothes"), has gotten a lot of attention, but it may have ramifications we aren't exactly prepared to handle fully.

The statue, that was reportedly done by INDECLINE, an anonymous anarchist street art collective, shows unflattering depiction of Trump as a lumpy overweight man, with a flat backside, translucent pale and veiny skin, and tiny genitalia completed with macaroni pubic hair. It's unforgettably graphic and is easily one of the grossest, yet hysterical things to happen during this ruthless election season.

The group responsible for the life-size sculpture had its reasons to create the pop-up art: They wanted to humiliate Trump. According to The Washington Post, INDECLINE wanted to poke fun at the Republican nominee for his authoritarian tendencies.

"Like it or not, Trump is a larger-than-life figure in world culture at the moment," an anonymous spokesperson for the group told The Washington Post. "Looking back in history, that's how those figures were memorialized and idolized in their time — with statues."

The Trump statue is far from flattering and that's exactly the goal the artists were aiming for while designing the creation for months. "We decided to depict Trump without his balls because we refuse to acknowledge that he is a man," an INDECLINE spokesperson told The Huffington Post. "He is a small arrogant child and thus, has nothing in the way of testicles."

The artists were motivated, that is clear, but it's not clear if they are prepared for a probable retaliation from Trump supporters. Soon after the statues were discovered, the hashtag #NakedTrump quickly began trending on social media. While plenty of tweets applauded the sculpture, finding it hilarious, just as many did not find the humor in it, arguing that it was disrespectful, implying that some sort of counter displays were in the works:

A spokesperson for the group told The Washington Post that they didn't expect the statues to last very long before they were taken down, but they were looking forward to the reaction from the other side.

"I don’t expect these things to last more than 30 or 45 minutes," he told The Post. "But I would love to watch some irate 65-year-old Trump supporter try to take the thing down with his bare hands."

The New York City Department of Parks and Recreation gave people some time to view the naked Trump replica, but gave a witty reason for removing it. "NYC Parks stands firmly against any unpermitted erection in city parks, no matter how small," Parks Department spokesperson Same Biederman said in a statement on Thursday.

While the statue is out of physical sight, the image will surely remain ingrained in social media for some time. During that time, however, Trump-opponents should be prepared for any type of graphic, unflattering, disrespectful aftermath that may ensue in the coming days or weeks. And if this election has taught anything, there's a good chance of that happening.