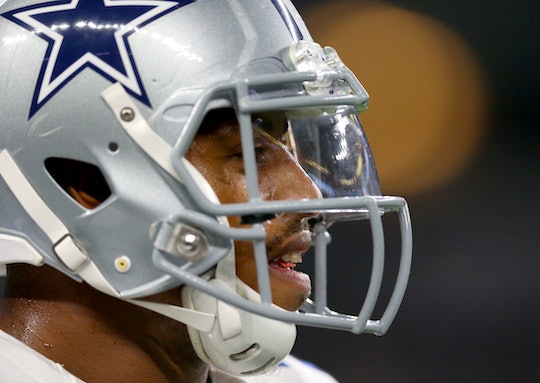 Why The NFL's "Second Chance" Defense Of Greg Hardy Is Disappointing

On Friday, Deadspin released 50 graphic photos and a very detailed account of the injuries sustained by NFL player Greg Hardy’s girlfriend, Nicole Holder, after he allegedly assaulted and threatened to murder her last year at his apartment. Hardy was subsequently convicted of assault after the Charlotte, North Carolina incident, but the charges were dismissed on appeal after Holder accepted a financial settlement and then refused to testify against Hardy, according to Deadspin. (Hardy has not yet responded to Romper's request for comment.) Still, even if Hardy didn’t serve time for the alleged crime, surely his NFL career was ruined after the arrest, right?

Wrong. At the time of the assault, Hardy was a defensive end with the Carolina Panthers, and he’s now a defensive end with the Dallas Cowboys, who signed Hardy after he was convicted of assault. And now that these disturbing photos have been released, the Cowboys have, essentially, come out in support of Hardy and his right to a "second chance." Cowboys owner Jerry Jones spoke about Hardy after Sunday's game, as reported in the Fort Worth Star-Telegram:

Greg ... he has a commitment to his teammates and our team. The way it’s set up in the NFL, relative to behavior, and in fact we wanted to give Greg a second chance. And you lose that in the NFL if you don’t do the right things. If he will do the right things, if he will take advantage of the opportunities that he has got there and this second chance, then we’ll see how it goes.

Jones wasn't the only member of the Cowboys to speak euphemistically about Hardy's so-called second chance. At a Sunday press conference, Cowboys coach Jason Garrett responded to the Hardy controversy by throwing his support behind Hardy. Just like Jones, he used the phrase "second chance" not once, but twice. "We decided that we were going to give him a second chance ... we decided to give him a second chance," Garrett said. "He’s worked hard for our football team up to this point. He knows what the expectations and standards are, and we’re going to hold him accountable to those.”

But what, exactly, are the "expectations and standards" that Garrett refers to? It seems that as an NFL team, the Cowboys' standards, specifically, were that it's totally okay to pay a man convicted of assaulting his girlfriend $11 million a year to play football. Not only that, but reports claim NFL executives saw several of the photographs that were later released by Deadspin, and subsequently decided not to kick Hardy out of the NFL, but rather to suspend Hardy for the first 10 games of the 2015 NFL season. According to reports, members of the NFL Players Association, who also saw the photos, then appealed that suspension and got it reduced to four games.

Looks like when it comes to domestic assault, then, the NFL's "expectations and standards" are that those convicted of assault deserve second chances. (And, of course, multi-million dollar salaries. And the adoration of millions of fans.)

The thing is, in the context of domestic violence, this notion of second chances is particularly disturbing. If there's one area where a second chance is dangerous, it's here. It's actually shockingly common for a woman to die at the hands of her intimate partner. According to the American Bar Association, 1,247 women were killed by their partner in the year 2000, and a full one-third of all female murder victims are killed by their intimate partner. The number one predictor of intimate partner homicide is previous violence, according to a Johns Hopkins University study.

In other words, domestic violence can and often does lead to murder. Which is one of the many, many reasons why those convicted of domestic assault do not deserve a second chance.

More Like This
Did Michael Peterson Ever Remarry After Kathleen's Death?
First Look: The New Jujube x Lilo & Stich Collaboration
You Can Walk Through Barbie's Dreamhouse & Fulfill Your Childhood Dreams This Summer
Prince William Opened Up About Living With Grief In A Raw Speech