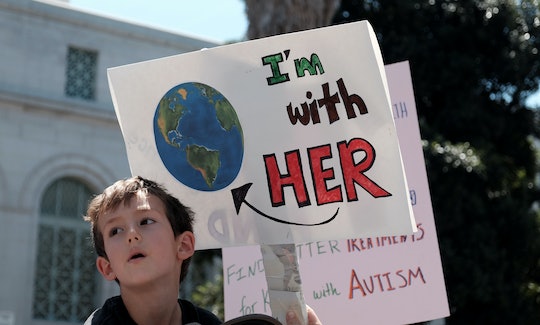 The Paris Climate Agreement Matters For Our Kids

President Donald Trump announced via Twitter on Wednesday that he will soon make a decision regarding U.S. participation in the Paris Agreement, a 2015 United Nations treaty aimed at reducing greenhouse gas emissions and preventing further ecological damage due to climate change. It's important to understand why the Paris climate agreement matters to kids, because they're the ones who will inherit the Earth, and refusing to address climate change (or even acknowledge it) could destroy the planet before they ever get a chance to take over.

The Paris Agreement has been signed by nearly 200 countries that have pledged to keep the increase of the average global temperature "well below" 2 degrees Celsius over the pre-industrial average, and attempt to limit the increase to 1.5 degrees Celsius. According to the National Oceanic and Atmospheric Administration, 21st Century temperatures have frequently reached up to 3 degrees Celsius warmer than those of the late 1800s and the early 1900s. According to NASA, the average temperatures for 17 of the last 19 years have been the warmest ever recorded, going back to 1880. Temperatures naturally fluctuate from year to year, but statistics show a steady increase that's clearly attributable to greenhouse gas emissions. Under the agreement, each country must set its own goal of greenhouse gas reduction, and report back to the U.N. on the progress. According to ABC News, the U.S. goal is to reduce emissions 26 percent by 2025, compared to 2005 levels.

The difference of a few degrees may seem inconsequential in some climates (and even welcome to some), but scientists have already observed a negative impact, particularly closer to the Earth's poles. Glaciers and ice sheets are melting, leading to a higher sea level and increased precipitation. Invasive species are thriving while native populations decline. According to the World Wildlife foundation, the polar bear population in the southern Beaufort Sea dropped 40 percent in just a decade due to sea ice melting. And according to National Geographic, Antarctica's Adélie penguins numbers have fallen from 32,000 breeding pairs to just 11,000 over the last 30 years.

What does that mean for humans in the United States? National Geographic also reported that as sea levels continue to rise, we can expect more hurricanes, floods, droughts, mosquito-borne disease, and a lack of fresh water. Eventually, (and we're talking a few hundred years, mind you) the United States will likely lose 28,800 square miles of land, according to Climate Central, which is currently home to 12.3 million people and one golf resort owned by the president. Despite that, and despite widespread support of the Paris Agreement by American citizens, his own Cabinet, and even the president of Exxon Mobil, CNN has reported that Trump is expected to back out of the agreement.