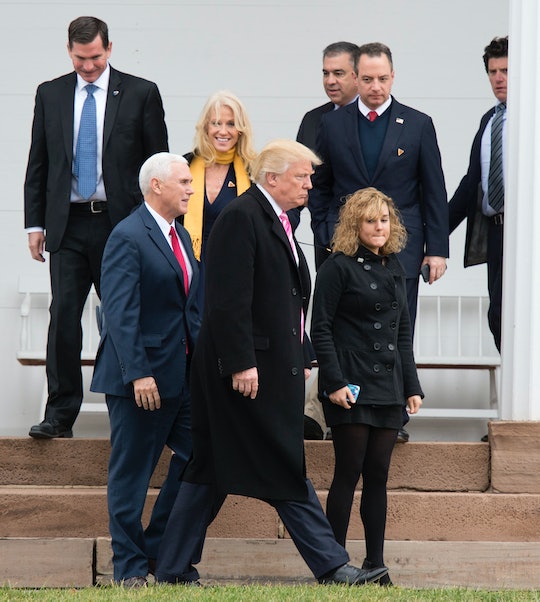 After President-elect Donald Trump's many tirades against The New York Times — in the past, he's called the newspaper a failure, "totally dishonest," and "a fraud" — it was somewhat of a surprise that he kept his meeting with the newspaper's staff on Tuesday afternoon. While at the meeting, he reportedly said The New York Times' coverage of him was the "roughest" of all newspapers'. If their relationship were to improve, he argued, "it would make the job I am doing much easier." The only problem? While having the press be nice to Trump might make his job (and life) easier, it would be a huge blow to democracy.

The thing is, the press is not meant to be a "you scratch my back, I scratch yours" industry, nor should being "nice" be at the top of their list of priorities. Journalists are meant to be watchdogs, and they're supposed to keep readers informed of government leaders' activities — both their successes and their missteps. A free press is one of the checks and balances that keep governments in line and puts power where it belongs: in the hands of the people.

In fact, a free press is one of the pillars that keeps democracies standing. Democracies give citizens the unique power to influence the government at all levels by allowing them to vote, to be represented in Congress, and to hold public office. But in order for a democracy to be effective, its citizens need to be informed when they make those choices and when they select representatives. Without a press that holds politicians accountable, millions of Americans would be left without access to news on leaders' corruption, abuses of power, and irresponsible leadership.

In 2011, Alan Rusbridger, the former editor of The Guardian, explained why journalists' absolute "apartness" from the church, the government, and other institutions was key. In a sense, Rusbridger was even arguing that journalists' ability to cause commotion and inconvenience to others — in essence, to not be "nice" — was essential to a democracy, writing:

[Journalists] don't have to respond to a party whip, make the compromises necessary in politics or answer to shareholders. They are not bound by the confidentiality agreements that bind others. They are careless of causing inconvenience or embarrassment. They don't have to win votes. They can write things – about the economy, say, or the environment – which may need saying but which are unsayable by politicians. They come from a different place. This freedom is a fundamental one.

The media's job is not to make a person's job easier or simply promote them. (And in fact, Trump already has a very effective public relations team that does this for him, mostly in the form of one Kellyanne Conway.) Instead, the media's job is to keep citizens informed. And if politicians care at all about the citizens they're meant to represent, that's a goal that they should respect. By constantly promoting mistrust of the press to his followers (even when that lack of trust is completely unfounded) and asking the press to "turn around" its relationship with him, Trump is undermining the democratic principles that the United States was built on.

So no, Donald Trump, the press should not be "nice" to you — and for the good of American citizens across the country, being "nice" should have nothing at all to do with how reporters do their jobs.