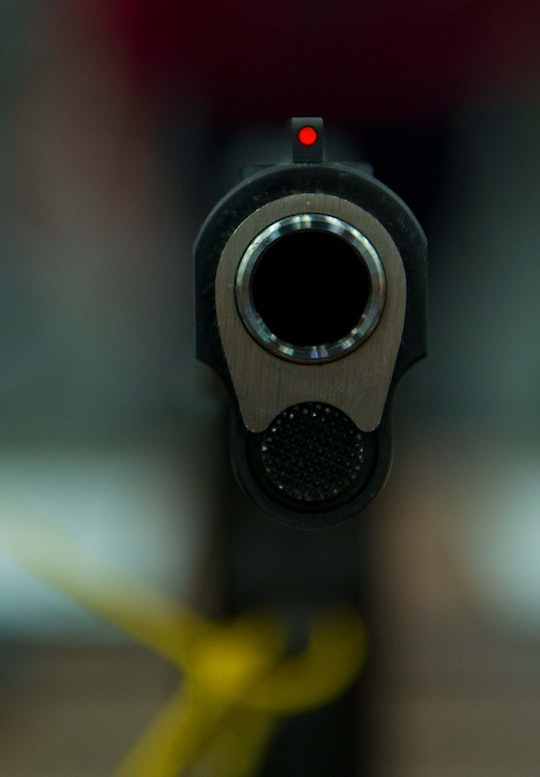 In the wake of the shooting massacre in Orlando over a week ago, it seemed that the U.S. Senate might actually pop their collective heads out of their collective backsides and pass basic, bare-bones, common sense gun safety legislation. But the news came Monday that the Senate roundly rejected the four measures that had been brought forth in the wake of the tragedy. Given everything that's happened of late, the Senate rejecting gun safety legislation appears to make so sense whatsoever — unless, of course, we consider the continuing and maddening congressional deadlock, the sinful lobbying powers of the National Rifle Association (NRA), and the deeply-felt belief among many in the American public that more guns — not fewer guns — will keep us all safe.

The four proposals on the table all aimed at limiting gun sales, according to The New York Times. One was an amendment to block people on the federal terrorism watch list and other terrorism databases who are banned from flying from buying guns. Senate Republicans, deeming this measure too inclusive, offered a competing measure which would have required a 72-hour review period before a person who has been suspected of terrorism within the past five years could purchase a firearm.

Both measures were defeated on the floor, and within the context of Senate bickering, it's easy to see why. One was a Democratic proposal; the other was a Republican counter-proposal. For either measure to have passed, one party would have needed to admit defeat.

The other two measures that failed on the floor followed the same one-two punch of measure and countermeasure: The original measure was introduced by Sen. Chris Murphy of Connecticut, a Democrat, who proposed stricter background checks for guns purchased online and at gun shows. The counter-measure, brought forth by Senate Republicans, was a vague affair that would provide funding to the National Criminal Instant Background Check System (NICS) and incentives to provide mental health records to the NICS.

But the efficient death of these bills really makes a person question whether the mechanics of Congress are in line with basic human psychology; party-backed bills go head-to-head with other party-backed bills, thereby making each congressperson feel like they're playing on a team rather than representing their constituents. It seems like preventing suspected terrorists who are on the no-fly list from purchasing firearms seems like an absolute no-brainer—especially given that 90 percent of Republicans supports this measure, according to a recent CNN poll—but within the sophomoric mentality of the U.S. Senate, common sense does not trump beating the other side.

This divisive mentality within Congress is stronger now than ever. The number of bills passed during the Obama administration has been unforgivably abysmal and historically unprecedented: Under the leadership of Kentucky Sen. Mitch McConnell, the Senate in 2014 passed the fewest bills of any Senate in modern history, according to The Washington Post, not to mention the unprecedented number of filibusters. ‌

Congressional squabbling aside, there's also that nettlesome issue of the NRA and its deep pocketbooks. It's impossible, really, to overestimate the political influence of the NRA. It is frankly bizarre that an organization founded in 1871 with the goal to "promote and encourage rifle shooting" should become, a century and a half later, one of the most influential lobbyists in the country. According to numbers crunched by the Center for Public Integrity, the NRA has been behind $46 million in campaign expenditures since Citizens United upended campaign finance laws in 2010.

In a 2013 interview with Mother Jones, gun policy expert Lee Drutman said that congresspeople are well-aware of the NRA's influence in their own states or districts. "They know what the NRA is capable of doing and the kinds of ads they're capable of running," he said.

This fear of an NRA backlash might, at least in part, explain why Republican senators continue to vote against gun control legislation that's popular with their own conservative constituents. It bears repeating that in a recent CNN poll, 90 percent of Republicans support the no fly, no buy measure that was brought forth by Democrats and almost unanimously rejected by Republicans this week in the Senate. A 2013 Pew Research Center poll found that 74 percent of Americans who live in a household where they or another household member belong to the NRA support making online and gun show sales subject to background check—this was the bulk of the other Democratic bill that failed to pass this week. ‌

However, the NRA itself, in the aftermath of the Orlando tragedy, even came out with a lukewarm statement that urged presumptive GOP nominee Donald Trump and his colleagues to remember that guns should never belong in the hands of dangerous terrorists or those on the watch list (no matter how postured that statement was). In a statement released on June 15, the NRA wrote,

The NRA's position on this issue has not changed. The NRA believes that terrorists should not be allowed to purchase or possess firearms, period. Anyone on a terror watchlist who tries to buy a gun should be thoroughly investigated by the FBI and the sale delayed while the investigation is ongoing. If an investigation uncovers evidence of terrorist activity or involvement, the government should be allowed to immediately go to court, block the sale, and arrest the terrorist. At the same time, due process protections should be put in place that allow law-abiding Americans who are wrongly put on a watchlist to be removed. That has been the position of Sen. John Cornyn (R.-Tex.) and a majority of the U.S. Senate. Sadly, President Obama and his allies would prefer to play politics with this issue.

So what happened? Did the NRA really mean what it said, or was there more going on behind the scenes than the public knew? Sen. Dianne Feinstein of California, who took the lead on the no fly, no buy measure this week, addressed reporters after her measure failed. "The power of the gun lobby over certain members of the Senate seems boundless," she said in a statement, making clear her belief that the NRA influences her colleagues.

Given that the two Democratic measures that were voted on today are widely supported by the public at large — Democrats and Republicans alike — it's difficult to explain why, amongst the general public, it seems that it's mostly liberals who are outraged by the Senate's inability to pass a single common-sense gun safety law. Most everyone supports no fly, no buy. Most everyone, including 84 percent of gun owners, believes that background checks should be mandatory, even at gun shows and online. So where's the Republican outrage?

An easy explanation is that Republican constituents are plagued by the same partisan side-taking as their representatives in Congress. Writing for CNN in 2015, journalist Sally Kohn argued that Republicans support the gun control measures when asked about them in polls, but don't support them when they're put forth by the opposing political party under the reviled Obama administration.

One can't help but wonder, too, if voters fear that one piece of legislation is a slippery slope that ultimately leads to the decimation of the Second Amendment. Voters support no fly, no buy... but they don't mind much that it's defeated in Congress because what if no fly, no buy leads to no guns for anyone, ever?

Aside from this fear of a slippery slope, many Americans believe that if more citizens have guns, there would be fewer gun fatalities because everyone would be able to protect themselves. This "good guy with a gun" theory has been thoroughly and repeatedly proven incorrect, but that doesn't stop people from believing it.

To cite just one study in the veritable mountain of data, a 2014 meta-study at UC San Francisco found that individuals with access to a firearm are twice as likely to be killed and three times likelier to commit suicide than individuals who don't have access to a firearm. The study found that women with a gun in their household are three times more likely to die by homicide than women without a gun in their household.