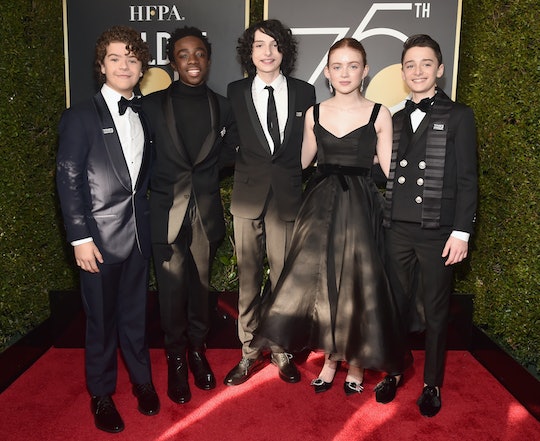 The red carpet for the 76th Annual Golden Globes is teeming with stars from the most popular shows and movies of the last year, but there are a few conspicuous absences. The young cast of Netflix's Stranger Things is nowhere in sight, despite the fact that they've been fixtures at the ceremony for the past two years. But there could be an explanation for why the Stranger Things kids aren't at the Golden Globes.

Stranger Things was nominated for Best Television Series (Drama) in 2017 and 2018, but it didn't land a nod in any category this year. That isn't because it's not a great show; according to Fansided, it just missed the eligibility deadline. To be nominated, new episodes needed to be released before Oct. 31, 2018, but Season 3 won't be premiering until July 4, 2019. That could be the reason why the cast isn't at the Globes: they simply weren't nominated, so they took the night off.

But that's just a guess, because there hasn't been an official statement on the matter from any of the kids (Finn Wolfhard, Millie Bobby Brown, Gaten Matarazzo, Caleb McLaughlin, Noah Schnapp, and Sadie Sink). None of them revealed their plans for Golden Globes night on social media prior to Sunday night. They might be watching from home just like everyone else.

As the countdown to the award ceremony continued, more and more celebrities filled the red carpet, but not the cast of Stranger Things. None of the kids mentioned the awards on social media in the hour before it was set to begin, either. Brown did post a photo of herself on Instagram that made it seem like she's not even in the United States today. She posed next to a bright red telephone box in a coordinating outfit, which appears to be a sign that she's overseas in London, England.

Co-star McLaughlin tweeted earlier on Jan. 6, "This is the day." But he didn't offer any more specific details. He could have been saying that this was the day of the Golden Globes, but most of the responses from fans were hopeful for a trailer or some other announcement relating to the show. Others just seemed confused by how vague the tweet was. Without much more to go on, it's a stretch to connect his post to the awards show.

Hilariously, a few Twitter users began to joke that Brown was on the red carpet when they got a look at American Horror Story: Apocalypse star Cody Fern. With his short brown hair, he seemed to resemble her just enough for the joke to land. Though don't be fooled by the similarly impressive hair game: Brown didn't manage to make it down the red carpet this year.

It seems like the Stranger Things kids are steering clear of this year's Globes. After two years of turning up dressed to the nines, they definitely deserve a break. Plus, they'll almost definitely be back next year, after season 3 has had some time to blow everyone's minds.