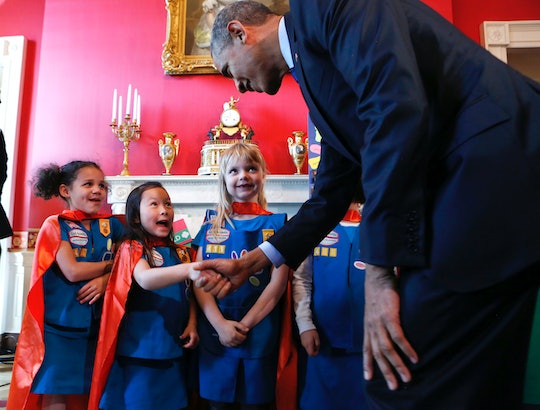 Why The White House Science Fair Is So Important

They're taking on some of the world's most vexing and urgent challenges, like climate change, cancer, and Ebola. They certainly have the brains to be great scientists and problem-solvers, but, for now, they're also just kids. Since the event's inception in 2010, brilliant young people have displayed their enterprising spirits and award-winning projects at the annual White House Science Fair at the invitation of President Obama himself. On Wednesday, a group of 130 students from more than 30 states attended the final fair of Obama's administration, and, in doing so, showed us all why the White House Science Fair is so important.

"If we invite the team that wins the Super Bowl to the White House, we need to invite some science fair winners as well," Obama said in a statement to reporters this week. "It's hard to describe just how impressive these young people are."

One student wanted to figure out a way to help an Ethiopian pen pal get reliable water and electricity, so she developed a low-cost renewable energy device for intercoastal waterways. A group of three designed a robot to clear the debris from the rails of the New York City subway, and according to a White House press statement, six girl scouts introduced the "Eco Bin" that dissolves styrofoam so it doesn't take 500 years to decompose in an landfill.

This year's impressive list of budding scientists seems endless. But while the event showcases some of the most interesting and camera-ready projects, it serves, more importantly, as a symbol of of what all American schoolchildren can achieve.

According to the results of a test administered to 15-year-olds in 64 other countries by the Program for International Student Assessment in 2012, American teenagers scored just average in science and below-average in math, lagging sorely behind other developed nations. Education Secretary Arne Duncan at the time called the scores a “brutal truth.”

That's why the White House Science Fair, just one tenet of Obama's Educate to Innovate initiative, which aims to improve the math and science achievement of all American students, is so important and so vital. The initiative is dedicated to expanding the scope of proven STEM education programs across the country, preparing teachers to teach STEM effectively, bolstering federal investments in STEM, and more.

"We belong on the cutting edge of innovation," Obama said in a statement this week. " ... We're a nation of tinkerers, and dreamers, and believers in a better tomorrow."

The White House Science Fair does more than just give some of America's best and brightest another chance to shine. It inspires all kids, their parents, and their teachers to aim higher — and it reminds policymakers how important it is to invest in our kids and in our future.