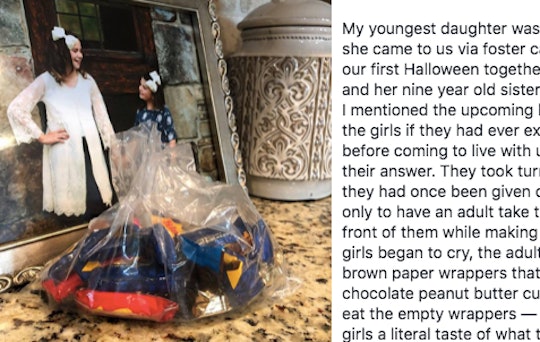 I'm willing to bet that most parents snatch pieces of their kids' Halloween candy when no one is looking. It happens. But for one family, it was incredibly important that no one touched the candy loot except for the trick-or-treater to which it belonged. But the reason why this mom taught her kids to count their Halloween candy is quite heartbreaking — and heartwarming — at the same time.

In fall of 2014, Amy Beth Gardner became the foster parent of two sisters — Bridgett, 5, and Breonna, 9, according to Us Weekly. The Tennessee mama was looking forward to Halloween with the girls, but was confused about the sisters' reaction every time she mentioned the upcoming holiday.

"I finally asked the girls if they had ever experienced Halloween before coming to live with us and was horrified by their answer," Gardner wrote on her personal Facebook page. She continued:

They took turns telling me about how they had once been given candy for Halloween only to have an adult take the candy and eat it in front of them while making them watch. When the girls began to cry, the adult handed them the brown paper wrappers that had been holding the chocolate peanut butter cups and forced them to eat the empty wrappers — a cruel way to give the girls a literal taste of what they were missing out on that Halloween evening.

Armed with this information, Gardner explained she knew she needed to approach Halloween with the girls cautiously. Her instincts were only confirmed when she saw the sisters were counting the pieces of candy they received while out trick-or-treating. Gardner knew what she needed to do.

"When we got home, I pulled out two plastic bags and a black marker and explained to the girls that I wanted them to count their pieces of candy as they put it into the bags," Gardner wrote. "When they finished counting, I helped them label their bags with the precise number of pieces of candy inside and, each time they would eat a piece of candy, I helped them relabel their bags."

Gardner ultimately adopted Bridgett and Breonna, who are now thriving in her home, according to Us Weekly. The story of that terrible Halloween manages to resurface each year, but something truly touching happened this year.

"Last night, as I was cleaning up our kitchen after dinner, I noticed my youngest daughter rooting around in the pantry," Gardner wrote on Facebook. "As I finished wiping down our countertops, she approached me with a bag of candy she had collected while at a recent Halloween event. She had wrapped the bag in a piece of paper and it was clear she was presenting it to me as a gift."

When Gardner pulled the piece of paper off the bag, she read the following words written by Bridgett: "Mom, I want to give you a taste of how much love I have for you by giving you my candy." Her youngest daughter — who had once been forced to eat empty candy wrappers — filled a bag of candy for her mom and gave it as a gift.

"You have gifts to offer, too," Gardner wrote. "But, like my daughter and her candy, I’m almost certain that your most valuable gift is connected to deeply rooted pain in your life." She continued:

You and I have the opportunity daily to make the choice to take the terrible things that have happened to us and turn them into gifts to offer to this hurting world. My daughter’s gift of candy was priceless because of what it cost her. She chose to give despite what had been done to her. What if you and I show that same kind of courage today as we take inventory of our own pain — and allow the bitter to become sweet?

I'm not crying. You're crying. How incredibly sweet. This mom knew exactly how to handle a very delicate situation and in doing so, she established her girls' trust right from the start. Gardner originally shared the story on Oct. 25 on her personal Facebook page; it has since attracted more than 6,500 likes and thousands of shares. The story quickly went viral when the post was shared on the Love What Matters Facebook page on Oct. 27. There, it has wracked up a whopping 39,000 likes.

This mom's thoughtful approach to her daughters' trauma led to building a foundation of trust that has only blossomed through the years. She could have easily brushed off their fears, but instead Gardner helped the sisters work through them. And the results were more than worth it.

More Like This
Lawmakers Passed Two Bills To Address The Baby Formula Shortage
New Dad Pete Buttigieg Shares Family’s Struggle To Find Baby Formula
This Underwear-Clad Mom Saved Her Pet Goose From An Eagle While Breastfeeding
This Mom Gave Birth On Graduation Day, So The University Brought Her Degree To Her