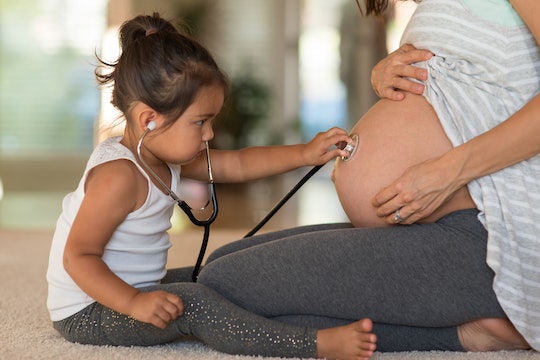 Why You Should Let Your Toddler "Help" You

We take for granted the idea that toddlers are self-centered little monsters (whom we love), because toddlers are naturally selfish until we teach them otherwise... right? Not according to Felix Warneken, an associate professor of psychology at the University of Michigan. On the contrary, Warneken's research has found that toddlers are helpful... and it looks like they're wired to be.

As a Ph.D. student, Warneken was interested in how children's thinking develops. "I realized that one important aspect of that is how to understand other people's minds," he explains. "In order to help someone with a problem you also have to understand what the other person's goals and intentions are." So, he wondered, if a toddler saw you drop your keys and struggle to bend down, would they recognize that your goal was to retrieve them? Moreover, would they lend a hand? His advisor dismissed the possibility — of course a toddler isn't going to help you; they're more likely to steal your keys than help you pick them up.

But Warneken wasn't quite ready to give up on the idea. While conducting a different experiment, he pretended he couldn't reach a ball that he and a toddler were playing with. Not only did the child go after the ball but they brought it right back to him. Thus began approximately 15 years of research to see just how much toddlers understood about other people's goals and how willing they were to help.

Warneken's first experiment, a version of which can be seen in the second season of Netflix's documentary series Babies, goes like this: an adult researcher demonstrates hanging things from a clothesline before eventually dropping a clothespin. They then indicate that they want the item — reaching for it, muttering — but do not explicitly ask for the child to retrieve it or do anything at all. Yet in experiment after experiment, across cultures, toddlers being studied generally waddle on up to the pin and hand it to the researcher.

"That was really just the the starting point," says Warneken. "It went really far from from there."

Subsequent experiments, all variations of that initial premise, went on to explore the limits of toddlers' intrinsic helpfulness... and it turns out these little humans are actually far more clever and cooperative than we give them credit for. Toddlers helped when it was more difficult to do so. They took time away from a new toy to help. In one experiment, a researcher didn't even appear to notice that they needed help and, without prompting or acknowledgement, toddlers helped anyway. Perhaps the most interesting variation of this experiment is one Warneken did with chimpanzees.

Since chimps and humans share a common ancestor (we went our separate ways between 6 and 7 million years ago), Warneken was interested to see if this evolutionary adaptation to help predates humanity itself... and it would appear that yes, it does: Chimps demonstrated similar understanding and helpful behavior as toddlers, indicating that humans' propensity to be helpful not only begins earlier in life than we assumed, but earlier in time.

Warneken admits that toddlers aren't helpful 100% of the time in any of his experiments, and has observed compounding factors that may make a child less inclined to help. "There's a difference in the helping behavior that seems to depend on the complexity of the situation," he explains. "It's not selfishness in the straight-up sense of 'I just care about myself' ... it's just too complex." So it's not that a toddler doesn't want to help, but maybe that they haven't quite mastered the skills necessary to do so just yet. The presence of a parent in a room can also make a toddler less inclined to offer assistance, which may present a diffusion of responsibility. Other times, says Warneken, it may be a simple matter of shyness. "It takes a little bit of courage to just go up there and help the person."

And yet, while it would seem that the myth of toddlers being entirely self-centered has been debunked, Warneken cautions us from going too far in the other direction. "It's not the case that kids start out as angels and then things go downhill," he explains, "but rather that early on they already show kind of this struggle between maybe more altruistic and more selfish inclinations that everybody has ... this push-and-pull thing is happening early on already."

You can stream Season 2 of Babies on Netflix.

More Like This
How To Properly Clean An Inflatable Pool
The Covid Vaccine For Kids Under 5 Has Been Sent To The FDA For Review
The Euphoric Terror Of Rollerskating Was Exactly What I Needed
Can The Baby Have That?