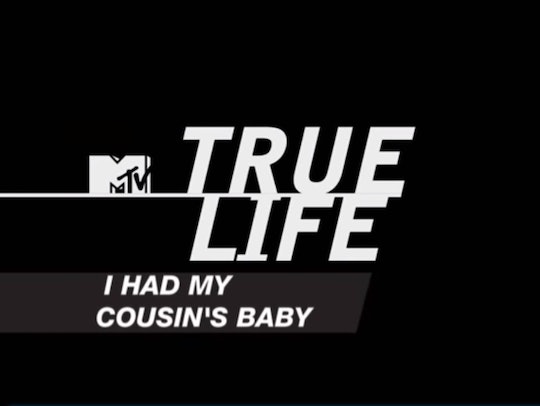 Why ‘True Life: I Had My Cousin’s Baby’ Is Not As Shocking As You'd Think

The newest episode MTV's True Life airs on Thursday night, and judging by the sneak peak, it's going to be an interesting one; it's titled "I Had My Cousin's Baby." The episode follows two women, Grace and Alexis. Grace and her cousin and husband, Dylan, have two children together and are moving to Los Angeles to escape the stigma they face at home. Alexis is six months pregnant with her cousin Andrew's baby, and the show chronicles her plight to get her family to accept her choice to be with and have children with her cousin.

While True Life usually takes on unusual stories, cousins marrying and/or procreating isn't actually that unusual, it's just culturally taboo. While Grace and Alexis' situation might seem unorthodox to many Americans, cousins marrying isn't all that uncommon here, and it's even more common abroad. In fact, the practice is really only stigmatized in the U.S. We're the only western country with laws against first cousins marrying, and even then, only half of U.S. states ban it, according to ABC News. Still, 200,000 cousins wed in the U.S. every year. Worldwide, a full 20 percent of married couples are comprised of cousins.

The American stigma against cousins procreating is tied to the idea that cousins who have kids together produce children with birth defects. But according to a study by the National Society of Genetic Counselors performed in 2002, the risk of serious birth defects only increases by a couple of percentage points when the parents are cousins. The New York Times reported that the general population faces a birth defect risk of 3 to 4 percent, and cousins only face an additional 1.7 to 2.8 percent risk. To put that in perspective, a mother in her 40s has a 10 percent chance of giving birth to a baby with chromosomal defects. And having a baby with your aunt's baby doesn't mean that your baby won't be intelligent: ABC News reported that Albert Einstein's parents were cousins.

With this subject matter, True Life has an opportunity to portray cousins having kids together as loving, normal couples who just happen to have a grandparent in common, but it's also the chance to dispel some of the myths around their relationships. It's about time that a show took on this complex issue.

Marrying and having kids with a first cousin isn't nearly the big deal that some people think it is, and I hope audiences show sensitivity in their responses to these stories. Really, the worst problem these couples face as cousins is that, because they share an extended family, they'll only be getting half as many gifts at their baby showers.