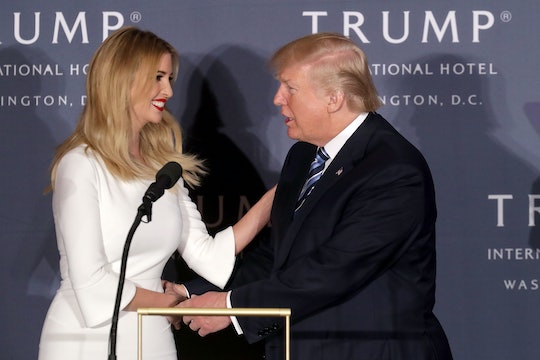 One of the big questions surrounding President-elect Donald Trump as he transitions to the Oval Office is how he intends to address the fact that his involvement in the Trump Organization poses a significant conflict of interest now that he is about to run the country. Trump himself has never shied away from boasting about his various companies and personal success, but on Twitter Wednesday, Trump announced that he would be "leaving his great businesses in total" to focus on his new role as president. That likely means his daughter, Ivanka, and adult sons will take over on his behalf, but the reality is that there are many reasons why Trump transferring his companies to Ivanka is still a conflict of interest.

In the series of tweets, Trump explained that he will be holding "a major news conference in New York City" on Dec. 15 to discuss the details of his plan to leave his various businesses ahead of taking office. He noted that his children would be in attendance, and wrote that "legal documents are being crafted" to remove him "completely out of business operations." Although Trump has yet to release his tax records, or to fully disclose his various assets and holdings, it is thought that Trump either owns or is involved "in more than 500 companies," according to CNN, including "about 150 that have done business in at least 25 foreign countries, including Turkey, Qatar and Saudi Arabia." In one of his tweets, Trump said that he was "not mandated [to leave his businesses] under law," but felt it was "visually important, as President, to in no way have a conflict of interest" as a result of his business dealings.

The Trump brand has, of course, long been a family affair. According to Business Insider, Trump's two adult sons, Donald Trump Jr. and Eric Trump, along with his daughter, Ivanka, all serve as executive vice presidents of the Trump Organization, which primarily deals in global real estate, including his well known, Trump-branded "commercial spaces, hotels, and golf courses." In a recent meeting with The New York Times, Trump spoke about his “very great company" as being "a big company" that's "all over the world," but later said that it wasn't his priority, adding, "[my] kids run it." Although Trump's tweets didn't specify whether his children will be officially taking over his business when he steps back to be president, a Trump Organization spokesperson told Business Insider that that would indeed be the plan:

We are in the process of vetting various structures with the goal of the immediate transfer of management of The Trump Organization and its portfolio of businesses to Donald Jr., Ivanka and Eric Trump along with a team of highly skilled executives.

(Trump's rep did not immediately respond to Romper's request for comment about that claim.)

But will that actually solve the problem? Many are speculating that it's not enough of a separation to avoid ethical conflicts. For one, Trump's children — as well as Ivanka's husband, Jared Kushner — have already reportedly been involved in meetings where Trump's role was that of president-elect, not as a businessman. According to Reuters, Japanese Prime Minister Shinzo Abe met with Trump at Trump Tower in New York City on Nov. 18 to discuss the president-elect's position on the alliance between the two countries, following remarks he had made during his campaign. While Abe later told reporters that he felt Trump was a "trustworthy leader," after their chat, photos from the meeting showed that both Ivanka and Kushner were present for the meeting. And, according to New York Magazine, Argentine president Mauricio Macri said told a Japanese newspaper that, during a post-election congratulatory phone call to Trump, he also spoke to Ivanka, whom Macri said he has known "since her infant days." (Trump also hasn't responded to requests for comment regarding the meeting with Abe.)

Trump's business and political interests have blurred in other ways, too. According to The Washington Post, the Trump International Hotel in Washington, D.C. hosted a group of "about 100 foreign diplomats" a week after the election, which raised concerns about the ways in which Trump hotels are likely to profit as a result of having Donald Trump in the White House. An unnamed Middle Eastern diplomat told The Washington Post that “all the delegations will go there,” now that Trump is President-elect, and an Asian diplomat said staying at the Trump International Hotel would now basically be common courtesy:

Why wouldn’t I stay at his hotel blocks from the White House, so I can tell the new president, ‘I love your new hotel!’ Isn’t it rude to come to his city and say, ‘I am staying at your competitor?’

The main problem, it seems, is that, while it might make good business sense for Trump to hand his company over to his children — aka, the people he claims have pretty much been running it anyway on his behalf — it doesn't change much about the likelihood of ethical conflicts. University of Minnesota law professor Richard Painter, who served as the chief White House ethics lawyer for President George W. Bush, argued in a recent Washington Post op-ed that Trump's family ties mean that, even if he hands over the reins, he'll still be able to stay abreast of the company's business deals and financial interests, and it would be near impossible for him to remove himself from the Trump Organization completely. Even though it would be "a difficult and expensive sacrifice on his part," Painter argued that it would be a much better choice for Trump to use a blind trust (where an independent trustee with no ties to the president-elect would be chosen to sell his assets and move forward with investments without any input from Trump himself) or "widely diversified, publicly traded holdings" — something that Painter says has been done by "every president for the past four decades."

A consequence of that, of course, is that Trump's children, who have built their careers in the Trump Organization, would also lose out as a result of that deal. That's likely not something Trump would be particularly supportive of, but Painter argues it's still theoretically possible to work around it. To avoid the continued blurring of ethical lines, he wrote that Trump's children (along with son-in-law Kushner) shouldn't be part of any of Trump's presidential matters, including being involved in the transition team, or acting as advisers in anything pertaining to his new role as POTUS. If they continue to oversee the Trump Organization, then the discussion of any business matters between Trump and his children should be prohibited, and "should be routed to White House counsel to make sure that the firewall is not breached," Painter said.

Trump has already received a great deal of criticism for his reluctance to fully divest himself of his business dealings following his election win. In a Nov. 17 editorial, The Wall Street Journal called for Trump to liquidate his business assets and remove himself completely from the Trump Organization. If he did so, he could then move the proceeds into a blind trust, leave any assets in his children's names, and, as Painter also recommended, separate himself from his children in all business-related matters. Given the fact that, Trump has "more potential conflicts of interest than anyone ever elected president," according to CNN, The Wall Street Journal argued that failure to liquidate and make a clear distinction between himself and his business would mean "he will be accused of a pecuniary motive any time he takes a policy position," and that "mixing money and politics could undermine his pledge to 'drain the swamp' in Washington," something that earned him a great deal of support from voters.

Trump's business interests certainly aren't the only thing that has made him a totally unorthodox president-elect, with challenges that are, in many ways, completely unprecedented. The fact that he appears willing to remove himself from his companies to focus on being a president free of potential conflicts is a promising sign (even if it is, as he himself noted, a matter of "visual" importance more than anything), and hopefully he will follow through and ensure that he has done all he can do avoid any ethical wrongdoing from a business standpoint. But until the details his plan are actually released, it also seems as though there are plenty of ways in which simply handing his business over to his children won't be nearly enough. And if he falls short of making a clean break, it could lead to a lot of controversy and outrage from voters as a result.