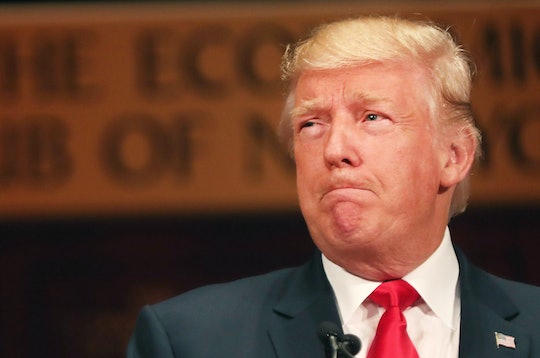 Friday, after questioning President Obama's place of birth for five years, presidential hopeful Donald Trump finally admitted that Obama was born in the United States. And just before the admission, Trump accused Hillary Clinton's campaign of starting the birth rumor in 2008. Trump's revision comes after mounting pressure from journalists and his own staff in response to his reluctance to reject his past birther comments when confronted by a Washington Post reporter this week.

His statements mark a reversal in his longstanding, thinly veiled racist theory that the president was born outside of the United States and therefore ineligible to be president. Trump first attempted to discredit the country's first black president in 2011, even after the president publicly released his birth certificate.

His birther comments catapulted him to the national stage in 2011. After making at least eight separate statements questioning Obama's place of birth in that year alone, Trump became the "highest-profile birther ever," according to Vox. "It catapulted him onto a national level and into the political arena"

In 2012, even after Obama released his longform original birth certificate, Trump didn't back down.

And then Thursday, a Washington Post reporter asked Trump whether he believed Obama was born in the United States, and he refused to answer. He avoided the question by saying he wanted to focus on other things. Later that day, the Trump campaign put out a statement accusing Clinton and her campaign of starting the birther controversy, which is definitively untrue.

The only known link between Clinton and the controversy was a volunteer for the campaign who, in the last days of the 2008 primary, spread rumors about Obama's place of birth, according to PolitiFact. Neither Clinton, nor her campaign, ever promoted the rumor. They also explicitly stated in staff memos that the campaign would never "say anything about his background." It's been proven that Clinton and her campaign have never supported any birther comments — and they definitely did not start them.

In the hours after Trump refused to admit Obama's place of birth, news outlets began discussing the conspiracy theory Trump had spread for years and now refused to reject. Members of his campaign staff and the GOP rejected the "theory" and admitted Obama had been born in the United States. Former Republican presidential hopeful Ben Carson even told CNN that Trump should apologize for his birther comments.

Trump finally conceded Friday — but didn't apologize — at the tail end of his new hotel's unveiling with one simple statement: "President Barack Obama was born in the United States. Period. Now we all want to get back to making America strong and great again."

Glad he finally got on board.