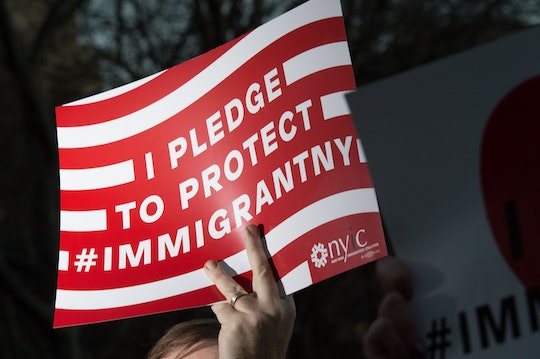 Since the early days of his campaign, President Trump has been clear that one of his major priorities would be to crackdown on immigration, particularly as it pertains to individuals from the Middle East. But in an executive order signed on Wednesday, Trump went a step further, saying that "vetting" of Muslims was a major part of his plan. He maintained that this does not constitute a ban. But here's why Trump's "extreme vetting" process is still as discriminatory as a ban.

In his first sit down interview as president, Trump told ABC News' David Muir that his executive orders around immigration were definitely meant to restrict entrance into the U.S., specifically for those coming from countries in the Middle East. “You’re looking at people that come in in many cases with evil intentions. I don’t want that. They’re ISIS. They’re coming in under false pretense," he told Muir. Drafts of the document show that it's the president's intention to block immigration to the U.S. from Iraq, Libya, Somalia, Sudan, Syria, Yemen, and Iran — many of which are countries in the midst of a serious refugee crisis. The order would also suspend the U.S. refugee resettlement program for at least 120 days.

His most recent order refers to what's been called the "Muslim ban." Trump's apparent motivations for restricting access to the U.S. for individuals coming from several countries throughout the Middle East are directly tied to concerns about ISIS and other terrorist groups. Though, it seems that Trump, and his administration, have not taken into consideration that "extreme vetting" may, in fact, further incite terrorist groups to take action.

Trump continues to push the idea that "radical Islam" represents the entire Muslim faith, which is patently false. Not only do Islamic terrorists represent a very small portion of Muslims, most who practice the religion reject extremists out right. And when it comes to categorizing immigrants as being disproportionally more criminal, statistics don't support that either. In fact, the immigrant population is less likely to commit crime than native-born Americans.

Not to mention that it endangers the lives of innumerable civilians, refugees who have been desperately attempting to escape their war-torn countries and flee to the U.S. or Europe not for economic opportunity, but as a matter of life or death. While Trump might be using very specific language that prevents the order from being referred to as a complete ban, the specifics of the plan — such as withholding visas and put an end to the "catch-and-release" policy that kept undocumented immigrants from being imprisoned — make it clear that his intention is take targeted action against specific groups of people: namely, those who are non-white and non-Christian.

Trump's most recent orders also seem to encourage racial profiling by local jurisdictions that would keep weekly lists of crimes reported by undocumented immigrants so that those individuals could be prioritized for "removal." These lists will also be made available to the public. Local law enforcement agencies will also be able to aid in the "round up" of those individuals, thanks to Trump's reinstatement of a program specifically designed to enable them to act as immigration officers. Immigrations and Customs Enforcement, also known as ICE, has been organizing larger raids that detain and deport undocumented immigrants for years. Trump's latest executive order will make their work considerably easier, and give them resources at the state and municipal level.

For cities that refuse to participate, Trump has also called for the prohibition of federal funds to what he calls "sanctuary jurisdictions," — i.e., the areas of the country that refuse to comply with his immigration policies. He also laid out plans to develop the Office for Victims of Crimes Committed by Removable Aliens, which would provide aid to those who have been the victims of crimes specifically committed by immigrants.

Trump's plans did not, however, include any kind of protection or aid for the families of detained undocumented immigrants. The implication being that entire families, including children, will face deportation once a member of their family enters the legal system. Whether those individuals will ultimately enter the legal system as a result of having actually committed a crime, or as a result of federally mandated racial profiling, remains to be seen.