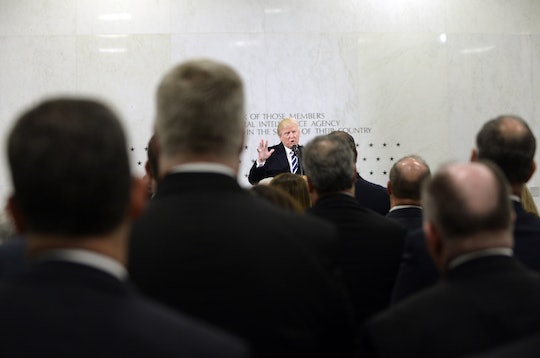 We Need To Talk About Trump's Press Conferences

Donald Trump may be many things, businessman, billionaire, president of the United States, but he is most certainly not a fan of the media. As made clear by his plethora of tweets railing against the "dishonest media," and his angry press conferences where he shouts out at reporters and refuses to answer their questions, Trump is skeptical of the media, and the press as a whole, to say the least. However, it seems that the president is still receiving a fair amount of applause at his press conferences, despite his behavior toward reporters and their respective outlets. And while this may seem confusing at first, I may have some answers for you regarding why Trump's press conferences get so much applause, even with his troubled relationship with the media. Spoiler alert: not everything is as it seems.

According to a report by CBS News, Trump's recent speech at the CIA headquarters this weekend was reportedly not at all well received, as the Trump team would have you believe. According to the report, the first three rows of attendees at the speech were allegedly and strategically filled with Trump supporters or staffers, not members of the intelligence community necessarily (a claim which Press Secretary Sean Spicer denied during a press briefing on Monday). In fact, audience members reportedly had mixed reactions, according to The Washington Post.

Romper has reached out to the Trump team for comment on the report and is awaiting response.

In case you missed it, here's why the new president was there: One of Trump's first official stops as president was the CIA headquarters in Langley, Virginia, where he was planning on speaking about Mike Pompeo. However, because Pompeo had yet to be confirmed at the time, Trump used the opportunity to talk about other matters, such as his inauguration crowd size, and his own intelligence and smarts.

And while Spicer claimed later that the audience members "gave him a five-minute standing ovation at the end in a display of their patriotism and their enthusiasm for his presidency," this apparently isn't as black and white as it appears.

In fact, according to the CBS report, "intelligence sources say many in the workforce were stunned and at times offended by the president’s tone which seemed to evolve into a version of speeches he’d used on the campaign trail." CBS also alleges that, according to the CIA itself, at least 40 audience members were planted by Trump, Pence, and Pompeo's respective teams. As there were about 400 people in the audience, a reported 40 rent-a-clappers would mean that 10 percent of the crowd was there by design.

While statements of Trump receiving a standing ovation at the CIA are indisputable (because he did, in fact receive applause), if it's true that the president reportedly buffs up his support by asking staffers to attend events, these statements must also be taken with a grain of salt — and a whole lot of concern.