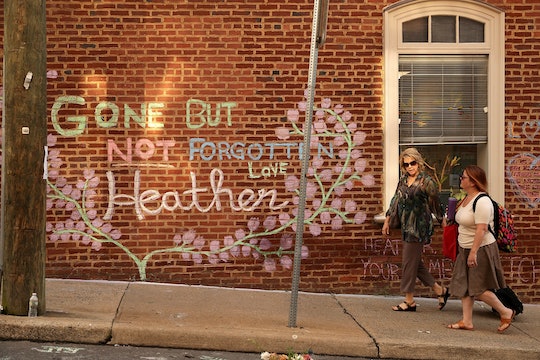 It honestly seems hard to think that anyone could have witnessed the white nationalist protests in Charlottesville, Virginia over the weekend and feel as though they were acceptable. Not only were the protesters' chants racist and anti-Semitic ("blood and soil" is an actual Nazi slogan), but the protests were violent and literally deadly — 32-year-old Heather Heyer died Saturday after an alleged white nationalist plowed his speeding car into a crowd of counter protesters. But in the wake of the rally, some have argued that attempting to block or silence the racist protesters would be a violation of the Constitution. And technically, they may be right. But the First Amendment is a bad defense of Charlottesville, because Constitutional protection doesn't even sort of mean that there won't be serious social consequences to what people are allowed to do and say.

Constitutional rights are often hotly debated, but they're also often misunderstood — or at least, narrowly understood — and judging by the social media reaction to Charlottesville, that's pretty evident. Many users have argued, for example, that the backlash against the protests is an attack on the First Amendment, while plenty of others have argued that the First Amendment doesn't actually apply to the white nationalist hate speech spewed at the rally. But neither of those are actually true, and the lack of understanding over what the First Amendment actually protects only makes the situation more complicated.

As much as protecting the Constitution is seen by most Americans as being a crucial aspect of democracy, it might be surprising to realize how much the First Amendment actually doesn't say about what is and isn't allowed. According to CNN, the specific wording of the First Amendment protects Americans from the state prohibiting the "establishment" or "free exercise" of religion, from "abridging the freedom of speech, or of the press," from preventing individuals from peacefully assembling, and from not allowing citizens to "petition the government for a redress of grievances." Those rights are important of course — in fact, they're essential — but it's also pretty clear that, when it comes to a situation like Charlottesville, the First Amendment is far from being the last word on what is and isn't OK.

The white nationalists who rallied in Charlottesville are right that they are allowed to voice their views — even if they're awful, and even if they are considered hate speech — because, as The Los Angeles Times noted, in the United States, hate speech isn't actually prohibited by the First Amendment. And in fact, it's the reason why American Civil Liberties Union actually supported the protesters' right to assemble in Charlottesville, according to Vox — free speech has to apply to everyone, even if it means they are literally shouting messages of bigotry and hatred.

But in the wake of the violence, and Heyer's death, it seems that the takeaway from Charlottesville needs to be that the outrage over what took place isn't just about hate speech, the same way that the white nationalist rally wasn't really just about protesting the removal of a Confederate statue. It was about a much larger issue of the growing white nationalist movement making itself visible, and to dismiss the issue as being one of free speech is to miss the point entirely. After all, as University of Virginia School of Law Vice Dean Leslie Kendrick explained to CNN, hate speech might be protected, but it's still oppressive and hurtful against minorities, and we still need to actively push back against it:

The fact is that free speech is not free, and we do not split the check evenly. One thing we must all do is be conscious of these costs. Another is to recognize that, in permitting all viewpoints, the First Amendment puts the responsibility on us to choose what to espouse and what to reject. All views are not equally good. It may be vital to the legitimacy of our system that we have the freedom to choose. It is vital to its survival that we choose wisely.

In other words, Charlottesville supporters may be correct when they argue that the protesters should not be censored for their views — censoring free speech, or allowing the government to put limits on what can be said or written about in the free press, isn't in anyone's best interest. But the fact that what they are saying is racist and disgusting and discriminatory means that after they've said what they are constitutionally allowed to say, those of us who find it abhorrent need to say so, and we need to keep saying so. And that becomes even more important given that what they said led to serious violence, and could definitely lead to further violence in the future.

Getting hung up on whether or not white supremacists are or aren't allowed to say their views publicly ignores the part of the debate that truly matters, and it also means that instead of condemning hatred, or fighting for social justice, we're stuck squabbling over hypothetical censorship or an imagined threat to Constitutional rights. The First Amendment might allow hate speech, but that doesn't mean we have to accept those words as legitimate, and it definitely does not mean that we have to accept accompanying acts of violence. More than that though, we need to specifically reject it. Free speech or not, hatred and racism is still not even slightly OK, no matter how loudly people are yelling it.