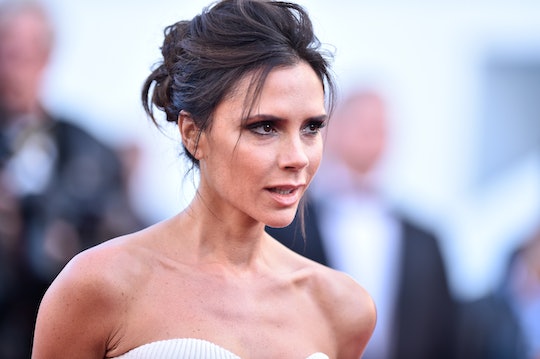 To celebrate the birthday of their 5-year-old daughter, Harper, soccer star David Beckham and fashionista Victoria Beckham both posted photos on Instagram. While David's garnered lots of likes, Victoria's stirred up attention and controversy because it shows her kissing her daughter on the lips. While many decried that behavior, here's why Victoria Beckham's photo kissing her daughter is not up for judgment.

First, here's a bit more about the post. In the photo, Beckham and Harper are lounging in the pool. It's a sunny day. Beckham caption it: “Happy birthday baby girl. We all love you so much. Kisses from mummy.” This all seems harmless enough, right? Apparently not for many of her followers.

One commented, with an air of assumed expertise, "It's nice but you're not supposed to kiss you're children on the lips. I'm not trying to be rude but it's true." Another wrote, "Not a fan of kissing my kids on the lips...That's just me." When the hubbub was picked up by media outlets, many asked their viewers if kissing children on the lips was controversial or offensive. Yes's and no's followed.

According to a social etiquette expert brought on by the BBC, it wasn't surprising the photo inspired a “vague sense of unease” for some. He went on to say that "normally with a member of your family you don't kiss on the lips unless it's your husband. I would be uncomfortable doing that and I think most people would be. If she feels it's appropriate, so be it. I wouldn't say it sets a particularly good example." In the end, the expert ruled that though it was an unusual thing for a parent to do, it was up to the parent. After all that, the expert hit the nail on the head. It's a parent's choice, and, regardless, it's not up for debate. It's true that by publicly sharing the photo Beckham may have opened herself up to commentary (that's how social media works), but tearing parents down for showing they love their kids is not admirable. It's overly critical and hurtful.

Others shared their experiences and photos of themselves kissing their own kids as an act of solidarity. One user wrote, "At 41, I still kiss my dad on the lips and my 16 yr old son. There is nothing sordid in it, it's just family." The conversation has sparked, overwhelmingly, an outpouring of support for Beckham and families in general. The critical comments, at this point, have all been buried in the positive messages.