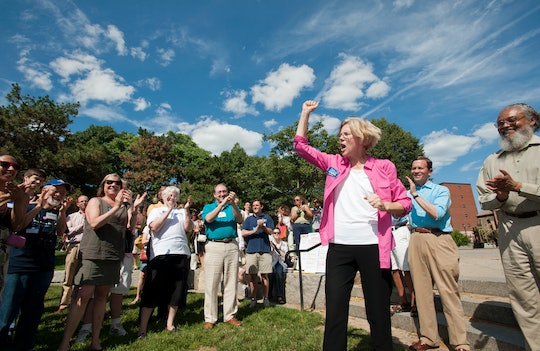 What Moms Lose When We Lose Elizabeth Warren

Elizabeth Warren ended her campaign for president on March 5, 2020.

In 2016, when Hillary Clinton failed to win the presidential election, I curled up in a ball on my bed and sobbed uncontrollably in the dark for hours. When my husband found me there, I couldn’t put words together to explain why I was so heartbroken. He said it’s the saddest he’s ever seen me. Other mothers I know were equally bereft. We suffered a collective disillusionment that has taken four years to work through.

On Super Tuesday, watching Massachusetts Sen. Elizabeth Warren fall significantly behind Vermont Sen. Bernie Sanders and Vice President Joe Biden, those deep feelings bubbled up again. My tears are not because my girl didn’t make it in the end. It’s so much more than that.

I know in any election, you win some and lose some. That’s life. Of course, it’s exciting to see a woman on the ballot. But when that woman is extraordinarily accomplished, has a record for standing up to people (mostly men) in power and holding them accountable and speaks for those without a voice, I’m ecstatic. I believe anything is possible. A woman will move into the White House and finally break the highest glass ceiling.

But then she doesn’t.

For many women, there’s a raw nerve that is pushed and poked when there’s a qualified, viable candidate who can’t get the job done. We call these accomplished women Hillary and Liz instead of Clinton and Warren because they feel like friends. Actually, they feel like an extension of ourselves.

We take it personally when candidates are criticized for their looks, wardrobes and their intelligence. While derisive adjectives are cruelly attached to a Hillary Clinton or Elizabeth Warren or Amy Klobuchar, they are — in truth — about all of us.

It’s about the mom who is still adjusting to the new realities of her post-pregnancy body; the mother returning to work leaving behind a tiny baby realizing work-life balance doesn’t exist. It’s about every woman who has been the smartest in the room but has to dumb it down to be heard. If I hear “She’s too smart” about Elizabeth Warren one more time I might explode. How can a person running for the most complicated job in the world be too smart? Being smart is usually valued, unless the clever person is a woman who is trying to take a man’s place.

Watching Warren take Bloomberg apart at Nevada debate was glorious from my vantage point. She told her story about being let go from her teaching job when she became pregnant. I too was a victim of pregnancy discrimination. Warren called on Bloomberg to release former employees from their non-disclosure agreements (NDA)s. I too was forced to sign an NDA. Elizabeth Warren refused to let Bloomberg pretend that he only told a few jokes in the office, and no one was harmed. I too was sexually harassed by my boss.

If I lean in any further, I’ll fall off a cliff. Mothers are trying to do it all and make people like them.

Before #MeToo, we often stayed silent about these things. That’s why this is all so deeply meaningful. Warren talks about the horrible stuff we’ve experienced because we cannot. But then she’s called nasty, just as Hillary Clinton was.

Women have been told for years, centuries actually, that they need to be coy, they need to play the game, they need to lean in. If I lean in any further, I’ll fall off a cliff. Mothers are trying to do it all and make people like them. It’s exhausting trying to be liked, all the damn time. Warren, has detailed plans to improve healthcare and maternal health outcomes, preserve reproductive rights, fight climate change, end corruption, and secure racial and economic justice for all. Yet, she is described as unlikeable and unelectable. It makes me want to scream and then cry.

As the path forward narrowed to Biden and Sanders, calls for Warren to step aside have become more fervent. But she is holding on, and I understand why.

On Super Tuesday, I went to East Los Angeles to one of Warren’s last rallies. “We can get timid. We can cower,” she said. “Or we can fight back… Me? I’m fighting back… This is our moment to dream big. Fight hard. And win.” Maybe Warren will not be the 46th president of the United States. With each election cycle, we dream big and fight but when we lose, it all takes a grave toll.

At this time when many women across the country are seeing a sad reality, I cling to the words of my 100-year-old grandmother, who was born a year before women could even vote, “I’m down, but not out.”

We want to hear from you! To respond to a conversation in the parenting space, look at our pitch guidelines, or send your essay idea to pitches@romper.com.

This article was originally published on March 4, 2020