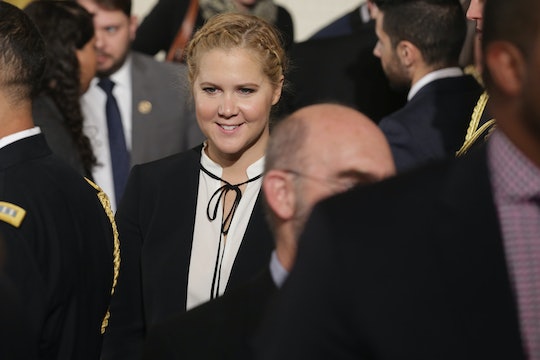 Why Was Amy Schumer At Obama’s Speech?

There were lots of supporters present today, but why was Amy Schumer at President Obama’s gun control speech today? It actually makes lots of sense. Schumer is a very outspoken supporter of stricter gun control laws. She is also connected to politics. Her cousin is Senator Chuck Schumer, a Democrat from New York. She’s campaigned with him to raise awareness and push for a lot of what President Obama appealed for today, namely expanded background checks.

But it’s also personal. During a screening of Trainwreck this July in Lafayette, Louisiana a single gunman killed two people and injured another ten. The shooter then killed himself. At the time, the comedian tweeted, “My heart is broken and all my thoughts and prayers are with everyone in Louisiana.”

In August, a fan tweeted at her to get more active in the fight against gun violence. Schumer was on it, correcting the commenter’s spelling of the victim’s names and telling them, “don’t worry, I’m on it.”

Since then, Amy Schumer has been more visible with her Senator cousin, who has long been fighting for stricter controls on the sale of firearms. Schumer gave a speech at a press conference with Sen. Schumer in Manhattan. She said, “We always find out how the shooter got their gun and it's always something that never should have happened in the first place.”

Today, Amy Schumer was very visible at President Obama's speech posting on social media throughout the day as she visited with survivors of gun violence and other supporters:

And it was widely reported that the President teared up during his speech, the Daily Mail reports that Schumer, too, was moved to tears by the President's appeal. When she spoke with her cousin in August, she made it very clear that she would continue to fight for stricter laws about who can purchase firearms. According to Politico, she said at the time:

What Chuck is describing are sensible measures and restrictions. No one wants to live in a country where a felon, the mentally ill, or other dangerous people can get their hands on a gun with such ease. The time is now for the American people to rally for these changes.These are my first public comments on the issue of gun violence — I can promise you this: They will not be my last.

With more celebrities and outspoken advocates like Amy, President Obama's executive actions might make it through Congress.