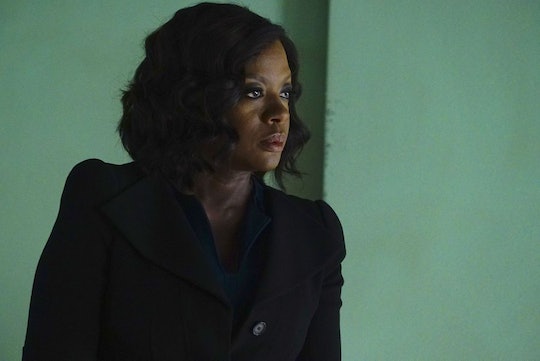 Why Was Annalise Arrested On 'How To Get Away With Murder'? She May Have Started The Fire

With each passing week of How to Get Away With Murder we discover who didn't die in that mysterious fire at Annalise's house but we still have no idea who set the fire or why. So far all we know is Annalise's home will burn to the ground in the next six weeks, someone doesn't make it out alive, someone else is found in the house as well, and Annalise gets arrested. However, if it was her house that's burned down why was Annalise arrested on How to Get Away with Murder? Well as is the case with anything on this show this whole situation is probably more complicated than it seems.

After Annalise looked under the sheet and screamed bloody murder the police then pulled her aside to ask her some questions and get an alibi from her. When Annalise failed to provide one she told them to just arrest her then, so they did. Annalise is now a suspect and has been taken into custody and the police may be right in doing so. Before she was carted away Annalise gave Oliver her phone and told him to wipe it clean of everything. Bonnie then had Oliver plant the phone back on the scene so that it would just look like Annalise dropped it. So sneaky!

There seems to be one major flaw in whatever plan Annalise is cooking up, however. At the end of Thursday night's episode it was revealed that another body was found in the house except this one definitely had a pulse. If Annalise did set the house on fire in an effort to kill someone and make it look like it accident it seems either someone else got caught in the crosshairs or someone that was supposed to die didn't. Either way this could really screw up Annalise's plans and now that she's in police custody it'll be a bit harder for her to pull the strings.

Thankfully for Annalise she has Bonnie working on the outside and it's obvious that Bonnie is a literal ride or die. Bonnie has seen Annalise through some very messy and sticky situations and has even killed for Annalise in the past. If anyone can make sure Annalise gets out of this without a scratch it's Bonnie.

Still, what exactly did Annalise do and who is under the sheet? Unfortunately we still have a ways to go before we get the truth and just like with any How to Get Away with Murder episode you know they'll probably be a twist. We can't wait!