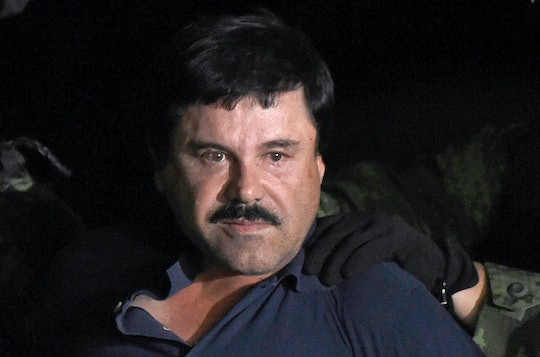 El Chapo Has Been Extradited To The U.S.

On Thursday, news broke that Mexican drug lord Joaquin ‘‘El Chapo’’ Guzman had been extradited to the United States, one day ahead of President-elect Donald Trump's official swearing-in ceremony. According to senior U.S. officials, El Chapo was sent to the United States because he was wanted on drug and trafficking charges. El Chapo is known notoriously for his attempted prison break in July of 2015 and a previous jailbreak in 2001.

A national manhunt was issued back in 2015 when El Chapo escaped through a tunnel in a maximum-security prison in Mexico. After review, authorities stated that El Chapo was able to crawl into the tunnel while he was in the shower, managing to escape security cameras. Scarily enough, that wasn’t the first time El Chapo had escaped prison, also managing to disappear back in 2001 (in that instance, he wasn’t recaptured until 2014). Of course, then, officials managed to keep him imprisoned for only one year before he escaped, yet again.

According to a statement obtained by The Chicago Tribune by two U.S. officials,

... the U.S. Drug Enforcement Administration took custody of Guzman in Ciudad Juarez, across the border from El Paso, Texas, and a plane carrying him departed for New York at 5:31 p.m. Eastern time. The officials agreed to give the information only if not quoted by name because they were not authorized to discuss the matter publicly. ‌

While many of El Chapo’s crimes have taken place in Mexico, he is wanted in the United States for multiple drug counts, as well as his alleged involvement in numerous instances of organized crime.

It's unclear as to what exactly will happen to El Chapo upon his arrival in New York, but as the Associated Press notes, "New York is one of several U.S. jurisdictions where Guzman faces charges."

El Chapo, or Guzman, is known as one of the main cartel bosses in Mexico, overseeing the Sinaloa cartel. In 2015, the Sinaloa cartel was labeled by the Drug Enforcement Agency as being "the most active supplier" of drugs in the United States.

Of course, it's still unknown why the extradition of El Chapo took place mere hours before Trump, known for his insistence to "build a wall" between the United States and Mexico, was sworn in as president. Of course, all theories are simply speculation at this point, but they're each entertaining to say the least.

For now, all that's known is that El Chapo is expected to face the charges brought against him in the United States. Hopefully, he'll remain tightly secured until then.