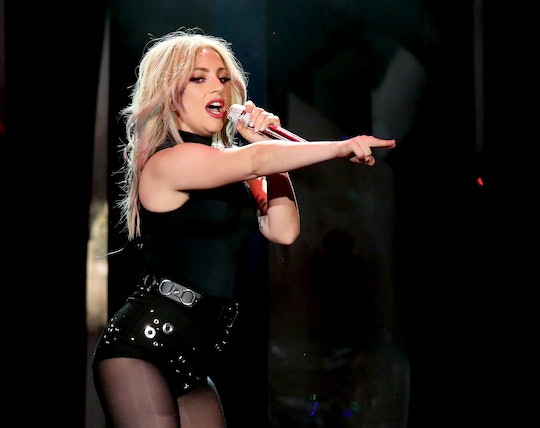 While some may argue that being a celebrity is easy and luxurious, simply looking at the tabloids at the grocery store once in a while could prove that to be untrue. Celebrities have to deal with a lot of the same issues that us regular humans do, but they have to deal with them in the public eye. Kesha, the singer and songwriter who has spent much of the past two years in a legal battle with her producer, Dr. Luke, knows this all too well. But, what's going on with that, and why was Lady Gaga subpoenaed by Dr. Luke? The legal warfare wages on, this time with Gaga's name being dropped into the middle of the chaos.

News broke this week that Gaga had been asked to provide information that Dr. Luke's team claimed was relevant to a defamation suit he filed against Kesha recently — specifically, several text messages between Kesha and Gaga that Kesha used in her own case against Dr. Luke. The suit was filed after Kesha's battle to leave her contract with Dr. Luke, over allegations that he had sexually abused her, was dismissed by the courts. Dr. Luke was never charged with any crime.

After the texts Gaga provided were deemed too heavily redacted, lawyers asked that the singer-songwriter also be deposed, so a fuller testimony could be heard. Romper has reached out to representatives for both Lady Gaga and Sony and is awaiting their responses.

But Gaga's team isn't happy with that account. According to a statement Gaga's representative gave to Variety, "Dr. Luke’s team is attempting to manipulate the truth and draw press attention," by subpoenaing Gaga in his case against Kesha.

In its own statement released to Variety, Dr. Luke's legal team claimed:

Dr. Luke’s counsel served a subpoena on Lady Gaga because she has relevant information regarding, among other things, false statements about Dr. Luke made to her by Kesha. This motion has become necessary because Dr. Luke’s counsel has not been able to obtain, despite repeated request, a deposition date from Lady Gaga.

However, Gaga's representative has denied those claims, saying, "As Lady Gaga‘s legal team will present to the court, she has provided all of the relevant information in her possession and is at most an ancillary witness in this process." Gaga's rep went on to claim that Dr. Luke's subpoena was "exaggerating Lady Gaga's role and falsely accusing her of dodging reasonable requests."

According to the docs, obtained by TMZ, the texts include Kesha saying she'd been abused by Luke, and imploring Gaga to join a "smear campaign against [Dr. Luke]." Luke says that campaign included Gaga urging Sony Music to cut ties with him, and promoting "Free Kesha" on social media.

TMZ also claimed that Dr. Luke was unhappy with the responses Gaga had provided, and is now requesting that "his lawyers to grill her face-to-face for no more than 3 hours."

For now, there has been no confirmation as to whether or not Gaga will appear in court to testify.