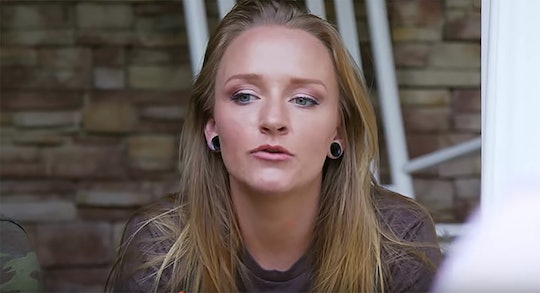 Maci Bookout is often in conflict with her 9-year-old son's father, Ryan Edwards. Although there are many reasons for their drama, a big part of their strife has to do with Edwards' legal troubles. In fact, Ryan Edwards was arrested on Teen Mom OG once again, his third arrest in less than two years.

Edwards' did not immediately respond to Romper’s request for comment regarding his most recent arrest.

There's a good chance TMOG fans will never forget the scene of Edwards driving while allegedly under the influence. The infamous footage was shot while Edwards was on the way to his May 2017 wedding to his now wife, Mackenzie Edwards, and MTV later released a statement condemning his actions.

Just one week after the interesting nuptials, Edwards checked into rehab for drug addiction. But if you thought MTV's disturbing footage was the reason for Edwards recovery stint, there was likely a more pressing reason for it — his March 2017 arrest for simple possession of heroin and possession of drug paraphernalia, according to In Touch Weekly. Yikes.

Sadly, Edwards legal troubles continued after his release from rehab in June 2017 (yep, he didn't make it past 30 days). Edwards was arrested for allegedly violating his parole in March 2018, just one day after he and Mackenzie announced their pregnancy news. You can't make this stuff up, right?

As for Edwards' most recent arrest that Bookout discussed on Monday's episode of TMOG, it went down in July 2018. Just days after Mackenzie announced the couple wouldn't return to TMOG, Edwards was arrested for allegedly violating parole related to his 2017 heroin possession charge. Sigh.

I got a speeding ticket and while I was pulled over, it came up that I was in violation of my probation because the community service had not been completed. I didn't do all of it. I went to jail for not doing all of my community service. It's not that I wasn't taking the community service seriously, it's just that we have so much going on, I didn't realize the deadline had passed. It was just a misunderstanding. I thought I had more time.

When Bookout was later asked about the arrest during an episode of the podcast Coffee Convos, she replied, according to E! News:

I don't know—I do know why but I just don't want to say—but to be honest with you. I feel better that he is in jail because I know he's safe there if that makes sense. I know he's not driving around, he's not doing something that could potentially hurt him or an innocent person. So it sucks, it's a crappy situation for everyone.

Of course, this situation isn't easy for Bookout or the couple's son, Bentley. And in a preview clip for Monday's episode, Bookout appeared stressed out at the prospect of sitting Bentley down once again to discuss his dad's ongoing issues.

The good news? Bentley's relationship with his dad has reached a "healthy" place. Bookout explained to Us Weekly:

Bentley has gotten older and is kind of understanding a little bit more about what’s going on. I don’t want to say they’ve gotten closer, but I think that it’s gotten healthier only because I think it relieves some of the pressure from each of them. Bentley was a child, like, wondering what’s really going on. I think if the right steps are taken from here, then it will end up good.

Here's to hoping Edwards will get his act together for Bentley's sake, and for the well-being of his newborn son, Jagger. Edwards' kids are what's most important, after all.