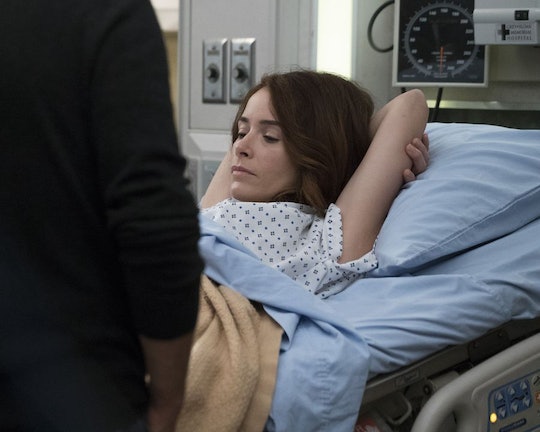 A New Megan Hunt Is Coming To 'Grey's Anatomy'

When Dr. Nathan Riggs first arrived at Grey Sloan Memorial Hospital, he was not welcomed with open arms. Not by Owen, anyway. Turns out they had a bit of a past that involved Owen's younger sister, Megan, who was also Nathan's fiancée. Megan went missing 10 years ago after boarding a helicopter that then disappeared. Now Megan's back and recovering at the hospital, but a different actress is playing her now than the one seen in Owen's flashbacks. So why was Owen's sister recast on Grey's Anatomy? It was simply a scheduling conflict.

Previously, Megan was played by Bridget Regan, who's currently starring on Last Ship and has a recurring role on Jane the Virgin. According to TVLine, because of her full-time work schedule on Last Ship, Regan was unable to commit to the multi-episode arc needed for Megan. Instead, Timeless star, Abigail Spencer, will be taking her place.

Although Timeless has been renewed for a second season, the show won't be going into production until November, allowing Spencer the freedom to take on the recurring gig. She'll be on the show for three episodes, according to IMDB, although it's possible she may stick around for a bit more. It'll be interesting to see how Megan's return impacts both Owen and Nathan.

While Owen and Nathan have since smoothed over their issues, Megan was at the root of their problems. The two couldn't agree on the circumstances that led to Megan getting on the helicopter that led to her disappearance. Nathan first claimed there was only space for one person to get on the helicopter with the patient that needed to go to the hospital and Megan said she should go since it was her patient. That's why she left and Nathan stayed behind.

However, Owen claimed that Megan got onto the helicopter because Nathan had cheated on her multiple times and she wanted to get away from him. Though Nathan later confessed to Maggie that he did cheat on Megan, he also mentioned that was only part of the story. Similarly, Owen later revealed to Amelia that he was the one who actually told Megan to get on the helicopter and leave Nathan; those were the last words he said to her before she disappeared.

Now that Megan's back, viewers will hopefully get the full (and true) story about why she got in that helicopter that day and what exactly happened when the helicopter disappeared. Additionally, she'll also hopefully be able to say where she's been these last 10 years and what happened to her. Owen was informed she was found in the basement of a house in a rebel-led neighborhood, where she'd been left after a raid. After being gone for 10 years, one can only imagine the level of trauma she may have suffered and the life long effects that may have on her.

As Megan recovers, both Owen and Nathan will be by her side. At the end of Season 13, Meredith told Nathan Megan had been found and encouraged him to go be with her, explaining that if it had been Derek she would've done the same. So what does this mean for Meredith and Nathan? Unfortunately, it means their relationship is over, at least for now. It seems unlikely Megan and Nathan will just jump back into a relationship after being apart for 10 years, but Nathan will certainly try to mend things between them.

Whether or not Megan will be open to that or even ready to try and be with him again, remains to be seen. Although it'd be cute to see them live happily ever after, I'd prefer Meredith (finally) get her happy ending. Maybe there's another, "Pick me. Choose me. Love me," scene in our future.