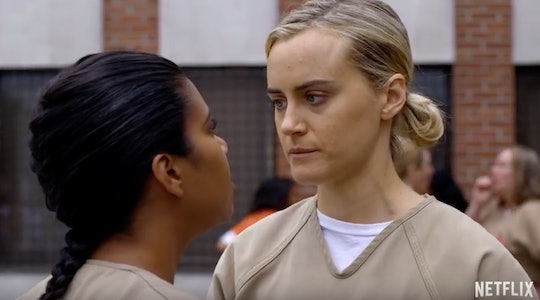 Why Was Piper Branded On 'Orange Is The New Black'? She's Pissed A Lot Of People Off

(Warning: This post contains spoilers from Orange Is the New Black Season 4, Episode 8.) Season 3 of Orange Is The New Black left binge-watching fans with a seemingly endless list of unanswered questions. We all wanted to know if Nichols would be returning, and if Sophia would be stuck in SHU, and if Piper would be the next "leader" of Litchfield. It turns out, the power struggles were just beginning. Season 4 began Friday, June 17 and as old questions were answered, new questions were just forming, one being, "Why was Piper branded on Orange Is The New Black?" To answer this question you had to binge-watch from the comfort of your living room/bedroom/any room to, at the very least, Episode 7, titled, "It Sounded Nicer In My Head."

More Like This
25 Great Sci-Fi Movies To Watch As A Family
Angela Kinsey's Daughter Dressed As Her Character From 'The Office' & Wow, The Sass!
Kate Middleton Talked About Baby Lilibet & Fed Some Rabbits While Meeting Jill Biden
Ridley Jones Will Introduce Netflix’s First Nonbinary Character In A Preschool Show

As Season 4 evolves, we watch Piper the "prison panty pusher," attempt to establish dominance in order to maintain her rather lucrative dirty underwear operation. She refuses the volunteer efforts of Maria and her Dominican "crew," starting what can only be described as a race war, in which she is in desperate need of protection. She first turns to her bunkmate, a Hawaiian woman who can leg press Piper and her bed, who walks with Piper and protects Piper, but clearly doesn't value Piper just as Piper doesn't value her. Their relationship is one born of convenience and, when the going gets tough, Piper cuts ties with her bunkmate as easily as she seems to emotionally disconnect from everyone in her life.

In need of additional protection, she forms a "community watch program" called a "Community of Carers," which morphs into a Nazi gang after she rats out Maria and the Dominicans for starting their own panty distribution scheme. Members like Sankey, Brandy and "Skinhead Helen" come to Piper's defense and, before she knows it or can (at least try to) stop it, Piper is the head of an Aryan pride gang. Piper is both protected and alienated, simultaneously.

Pipers inability to stop a racist group from gaining power, only adds to her (arguably) major character flaw: her selfishness. Piper insists that her Nazi group is a necessity, albeit temporary, and there's nothing she can do to quell their "white power" calls to action because, well, without them she would be alone. Her inability to be self-sufficient trumps the dangerous power dynamics she continues to fuel, and how others are negatively affected by her attempts to maintain power fall second to her need for inclusion and acceptance (and money).

Eventually, Piper finds herself alone during a party welcoming Nichols back to Litchfield after he extended stay at Max. Piper wasn't invited by Red, or any of her previously supportive friends, adding to her feelings of loneliness and solitude. While she is knee-deep in the realization that she has sufficiently alienated herself from the people who cared about her, her bunkmate and former bodyguard comes to her in a seemingly kind moment of understanding. Instead of reaching out to rekindle a friendship that never existed, Piper's bunkmate turns her over to Maria and the Dominicans, who hold her down while they brand her with the very symbol she seemed comfortable associating herself with: the swastika.

The scene is violent, sure, and listening to Piper scream for help and, eventually, in pain is difficult. However, her actions leading up to the moment she is branded leave you (or, at least me) unable to completely sympathize with her. Or, you know, at all. Piper has never been one to take full responsibility for her actions, or how they affect others. Now she is forced to look at what she has done, who she has decided to associate herself and what she has decided is "acceptable," and that is something that, I'm assuming, many viewers won't be entirely too heartbroken over.

Like every other character on Orange Is The New Black, Piper is complicated and filled with both good and bad characteristics that make you love her and hate her (but mostly hate her) simultaneously.