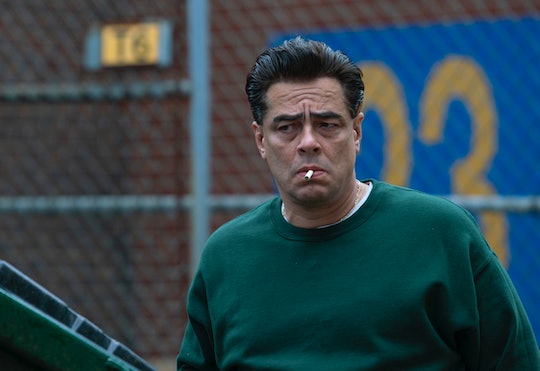 In Ben Stiller's most ambitious directing project to date, Escape at Dannemora, tells the story behind the infamous 2015 prison break at Clinton Correctional Facility. With the help of two guards named Gene Palmer and Joyce "Tilly" Mitchell, two inmates, Richard Matt and David Sweat, successfully sneak out of the facility, triggering a statewide manhunt that lasted nearly a month. But viewers may be wondering: why was Richard Matt in prison in the first place? The miniseries hasn't covered much backstory about the two men at the center of the plot, so it's a good question.

Both Matt and Sweat were convicted on gruesome murder charges and serving longterm sentences — 25 years to life for Matt and life in prison for Sweat. But Matt's crimes took him across state and international lines; according to the Democrat & Chronicle, the upstate New York native was reportedly extradited from Mexico, where he was imprisoned for murder, because he was such a difficult inmate.

Back in 1997, the dismembered body of a missing 76-year-old man named William Rickerson began washing up on the shores of Tonawanda Island in the Niagra River. Eleven years later, in 2008, a man named Lee Bates admitted his involvement in the murder while testifying against his accomplice: Richard Matt.

Bates testified that Matt believed Rickerson was in possession of a large sum of cash hidden away somewhere. According to his testimony, Matt coerced Bates into kidnapping the man together in an attempt to find the cash. The pair bound and gagged him, threw Rickerson into the trunk of Bates' car, and then drove to Ohio and back — a trip lasting over 24 hours — periodically stopping to beat Rickerson along the way. Police believed Matt's theory about the money was false, and, eventually, he tired of waiting for Rickerson to tell him where the money was. He broke Rickerson's neck with his bare hands, dumping the body on Tonawanda Island. Later, he returned to dismember the remains and throw them into the river.

Matt fled first to Texas and later crossed the border into Mexico. There, he attempted to rob another American of $300 at a bar, eventually stabbing the man nine times and killing him. He was sentenced to 23 years in a Mexican prison, but in 2007, was extradited back to the United States. Back in New York, following Bates' testimony against him, Matt was sentenced to 25 years to life in prison to be served out at Clinton Correctional Facility, where he met Sweat.

In 2015, Matt and Sweat successfully broke out of the prison, but by the time they were discovered, Matt and Sweat had already parted ways. Sweat was nearing the Canadian border and, though wounded, was apprehended alive. Matt, on the other hand, was shot and killed by police outside the cabin he'd been hiding out in.