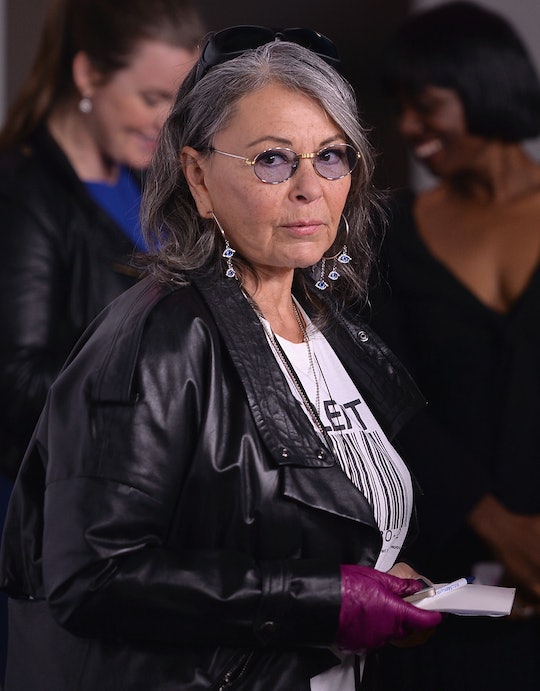 The Upsetting Reason 'Roseanne' Was Canceled By ABC

ABC has canceled Roseanne, as confirmed by TV Line. But many fans may be asking themselves, why was Roseanne canceled after such a successful revival? Sadly, the network scrapped the series after it's star, Roseanne Barr, went on a racist tirade on social media, as the previously mentioned report claims. The president of ABC, Channing Dungey, released a statement condemning Barr's comments, saying: "Roseanne’s Twitter statement is abhorrent, repugnant and inconsistent with our values, and we have decided to cancel her show." The cancelation comes just seven days after the Season 10 finale of Roseanne aired on ABC.

The tweet in question has since been deleted, but according to NBC News, Barr compared Valerie Jarrett to an ape. "Muslim brotherhood & planet of the apes had a baby=vj," Barr allegedly wrote on Monday, May 28. Valerie Jarrett was one of President Barack Obama's political advisers during his time in office, and Barr was allegedly responding to another Twitter user when the racist statement was made. Barr apologized the following day, tweeting that she was "truly sorry" for the "bad joke" made about Jarrett. The actress also wrote that her joke was "in bad taste" -- something everyone agreed with.

ABC's decision to cancel Roseanne came after not one, but two executive producers left the show. First it was Whitney Cummings, who announced on Twitter on May 18 that she wouldn't be returning due to "work commitments" and her "tour schedule." Cummings departure was unrelated to Barr's alleged racist tweets, which took place several days later. However, comedian and actress Wanda Sykes, a consulting producer on the series, announced she would not be returning after Barr's alleged comments went viral.

Both departure announcements were made on Twitter and can be read below.

The news of Roseanne's cancelation will definitely come as a shock to the remaining cast and crew. The series revival was one of the most anticipated for 2018, and Roseanne's Season 10 premiere on March 27 blew rating expectations completely out of the water. The back-to-back 30-minute episodes that aired on March 27 brought in a reported 18.2 million viewers, per Vulture.

Unfortunately, all of the ratings in the world couldn't save Roseanne from, well, Roseanne. Though the actress was the heart of the sitcom and one of the creators of the original series, her political and social views continuously caused uproar. For starters, Barr has made it no secret that she is an adamant supporter of President Donald J. Trump -- something that even crossed over onto the family television series as part of her character.

Plus, President Trump took to Twitter (of course) to congratulate Barr on the success of Roseanne's revival after the incredible ratings we previously mentioned were announced.

Speaking of Twitter, the outspoken social media platform is pretty thrilled with ABC's decision to can Roseanne. Even the show's title, "Roseanne", quickly jumped to the top of trending topics as users tweeted their excitement over hearing it had (finally) been cancelled. Some users questioned why Roseanne could get canceled bu Trump's presidency couldn't (LOL!), while others pointed out a reminder that it was Barr's alleged comments that left many people (cast, crew, writers, etc.) without a job.

Even celebrities like Shonda Rhimes and Charlie Sheen chimed in on the news. Not only did they offer comment on the situation, but they also made it clear they support ABC's decision. Sheen even suggested that with Roseanne getting axed, there's now time for a Two and a Half Men revival to be made. Um?

However, one of the best comments on Twitter about Roseanne's cancellation comes from actor Josh Gad. We'll just let Gad's words do the talking here:

We're with you, Josh. Hopefully everyone else is, too.