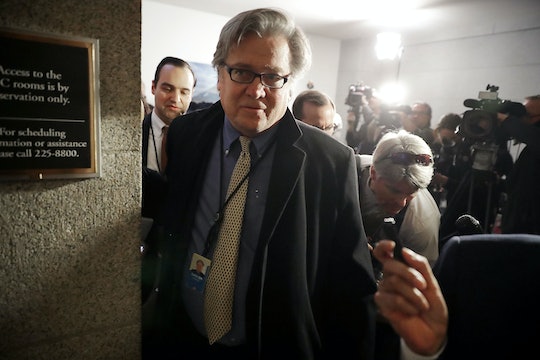 The Trump administration faced a surprise reorganization on Wednesday President Donald Trump removed Steve Bannon from the National Security Council. It was just one of a handful of changes, according to Bloomberg. The former Breitbart chief's appointment has long drawn criticism from politicians and citizens alike. Homeland Security Adviser Tom Bossert's role in the National Security Council was reportedly downgraded, while Director of National Intelligence Dan Coats and Joint Chiefs of Staff Chairman Gen. Joseph Dunford will now attend meetings of the Council's Deputies Committee, according to Wednesday's memorandum.

A source within the administration told CNN that Bannon's original role had been to oversee former National Security Adviser Michael Flynn's work on the Council, who resigned amid scandal in February. A White House official told NBC that Bannon "felt he was no longer needed" now that Flynn was gone, while another source told The Wall Street Journal that the decision actually came from Flynn's successor, Lt. Gen. H. R. McMaster. The White House did not immediately reply to Romper's request for comment. Some are questioning why the goal of overseeing Flynn was never shared before now, and why Flynn was ever appointed in the first place, if the administration thought he needed to needed to be watched.

Bannon's original appointment to the council was criticized as both unprecedented and dangerous, with former acting CIA chief Michael Morell telling CBS This Morning that "Having somebody like Bannon in the room brings politics into a room where there should be no politics." Like the president, Bannon has no experience with national security or foreign policy, which left some questioning how his seat on the council could be beneficial. According to a New York Times report, Trump was "not fully briefed on details of the executive order he signed" that placed Bannon on the council, calling into question whose idea it was in the first place. Trump denied the report via an angry tweet.

Critics were particularly concerned about Bannon's extremist views and his ability to sell the president on them. Bannon has, in the past, championed fear as a motivator, and said that he wants to "destroy the state" and "bring everything crashing down." He often speaks of a theory called "The Fourth Turning," a prophesy that America is destined to be reborn following a great war. An October headline referred to him as "the most dangerous political operative in America." Now, he'll no longer be a member of the council that decides if the United States will start a war.