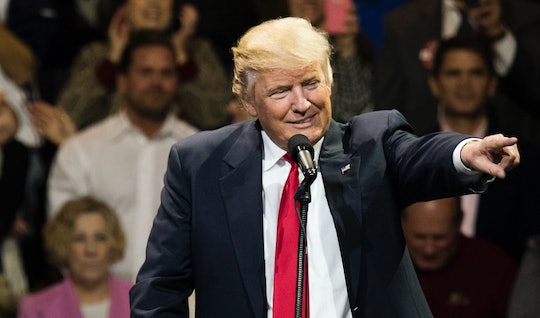 Why Was Trump's Taiwan Call Such A Big Deal? China Won't Be Too Happy About It

President-elect Donald Trump does not have any experience in politics. As a seasoned, hardworking businessman, Trump has spent more time in his own personal office in Trump Tower than an elected office. So, it is no surprise that he is learning things as he goes — and even president-elects make mistakes from time to time (is there even a manual or how-to guide for the incoming president?). Heck, there is so much that voters are learning about the presidency along with Trump. So when Trump took a phone call from Taiwan on Friday afternoon to the dismay of critics, a lot of people had to learn why was Trump's Taiwan call such a big deal. Trump's phone call with Taiwan, as it turns out, disrupts America's relationship with China. I bet Trump is now wishing there was a manual for the presidency.

According to The New York Times, during the phone call, Taiwan president Tsai Ing-Wen "offered her congratulations" to Trump. While it may sound like an innocent phone call between two diplomatic leaders, it could have a major effect on the United States' relationship with China. That is because, according to The New York Times, the US "severed diplomatic ties with Taiwan after its recognition of the People's Republic of China."

This is the first time that a president or president-elect has ever spoken to a Taiwanese leader since 1979. Its a big deal because China and Taiwan don't have the strongest relationship — according to The New York Times, "Beijing views Taiwan as a breakaway providence and has adamantly opposed the attempts of any country that tries to open official relations with it." In 1979, a "one China" position was established where the US took to recognize that there is one China and Taiwan is a part of that.

This was not a good time for Trump to take the call with Taiwan, because China is already "concerned" about the current U.S. defense policy bill, according to Reuters, which "suggests high-level military exchanges with Taiwan." "China firmly opposes the United States and Taiwan carrying out any form of official contact or military exchange," Foreign Ministry spokesman Geng Shuang told reporters at a press briefing. China warned that this could possibly damage broader US-China relations. Hours later, Trump took the phone call with Taiwan.

The US definitely does not want to upset China. The economies of both nations are very closely intertwined, and according to the White House, each country has a strong stake in the economic prosperity of one another, which are essential to the livelihoods of both citizens. Any bad blood between the two countries could be detrimental. According to Business Insider, the call is "likely to infuriate Beijing and hinder US-China relations." According to The New York Times, the White House was unaware that Trump would be speaking with Taiwan. Reactions to Trump's conversation with Taiwan show just how bad of a move it was:

Trump taking this call with Taiwan could be a reported business move. A few weeks ago, Shanghaiist reported that Trump was "considering constructing a series of luxury hotels and resorts" in the northwest Taiwainese city of Taoyuan.

It is unclear what the consequences of Trump taking this phone call will be. What is clear is that Trump messed up — big league.