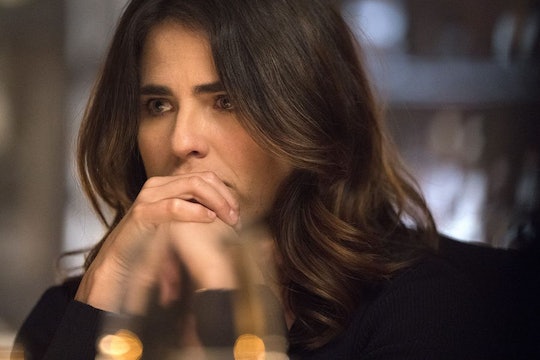 Last season, one of the Keating Five was killed off the show, shocking fans everywhere. In a twist that a lot of people didn't see coming, it was Wes who was under the sheet during the first half of Season 3. Viewers were then left shocked yet again when it was revealed in the season finale that Laurel's father, Jorge, was behind Wes' murder. So why was Wes killed on How to Get Away With Murder? Hopefully the new season will provide some answers.

During the end of Season 3, a lot of clues about Wes' death fell into place. A.D.A. Denvers was somehow involved and was seen working with Dominic, who was the one who actually committed the crime. Then, at the end of the episode it was revealed that Dominic was an old family friend of Laurel's who was working on her father's orders when he killed Wes. This led many fans to wonder how A.D.A. Denvers was connected to Jorge and why he wanted Wes dead in the first place.

When discussing the season finale with Entertainment Weekly, show creator Pete Nowalk refused to give a straight answer on the matter. "We do know there's some connection [between Denvers and Jorge], but obviously we didn't tell you what that was," he said.

Nowalk also noted that Jorge putting a hit on Wes is "more complicated" than him just wanting to be back in Laurel's life. The two have a messy past and Wes, unfortunately, got caught up in the crosshairs of that. It's already been briefly mentioned that Laurel was kidnapped because of her father and their relationship is clearly strained. But that still doesn't really explain Jorge's end goal in having Wes erased from existence.

Was his hope to get rid of Wes so that Laurel would have to crawl back to her family? Because if that was the plan, he was probably disappointed with the result. Although the Keating Five (now Four) are a hot mess, they're probably more of a family to Laurel now than her actual family is, and they're the ones she turned to after Wes died.

Maybe Jorge just felt Wes wasn't good enough for his daughter and he figured the best way to end their relationship was to kill him. Still, that seems like a very extreme measure to take just to split up a relationship. However, Jorge is kind of a mobster, so perhaps he didn't see the big deal in having Wes taken care of. Who knows? At any rate, it seems Laurel will soon figure out the hand her father and Dominic played in Wes' death.

Nowalk hinted that the look on Laurel's face when she saw Dominic, after he stopped her from killing Charles Mahoney, seemed to indicate Laurel was beginning to figure out Dominic's connection to Wes' death. "I think you can interpret that [Laurel's] mind is putting together a lot of pieces there, and those are pieces that we'll put together for the audience next year," he said in the same Entertainment Weekly interview.

Nowalk also added that whether or not Laurel suspects her father's involvement in the death of Wes, she will wonder if he had something to do with it. "I think it could start some real family drama." I'd have to agree. Nothing says familial tension like finding out your dad killed the father of your unborn child. I definitely wouldn't want to go to Thanksgiving at the Castillo house.

If Laurel does discover the truth, will she try to kill her father like she tried to kill Charles? They already have a rocky relationship so I don't think Laurel would feel that remorseful about wanting to kill her own dad. Still, that doesn't mean she'll do it. Fans can see what happens next between Laurel and her father on Season 4 of How to Get Away With Murder.