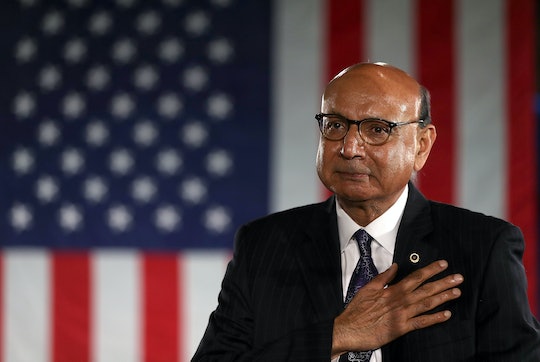 Khizr Khan, the Gold Star father of an Army captain who died in Iraq in 2004, was scheduled to give a talk in Toronto, Canada on Tuesday, but canceled his plans when he was reportedly told that his travel privileges are under review. At this point it's unclear who contacted him or why Khan reportedly wasn't allowed to travel to Toronto. But given the tense atmosphere surrounding all immigration and travel issues of late, the incident has prompted many to wonder whether tightened restrictions at the U.S. border might somehow be related.

The news broke on Monday, when Ramsay Talks, a Canadian organization that hosts "ground-breaking, often controversial" speakers, announced on its Facebook page that Khan's speech had been canceled. "Late Sunday evening Khizr Khan, an American citizen for over 30 years, was notified that his travel privileges are being reviewed," the Facebook message reads. "As a consequence, Mr. Khan will not be traveling to Toronto on March 7th to speak about tolerance, understanding, unity and the rule of law."

The message didn't specify which organization had allegedly contacted Khan, and it didn't provide details about what Khan might have meant when he reportedly said that his privileges are "under review." A U.S. Customs and Border Protection official told Politico that "CBP doesn’t contact travelers in advance of their travel abroad." Romper reached out to Ramsay Talks for details about the cancellation, but had not heard back at the time of publication.

Mr. Khan offered his sincere apologies to all those who made plans to attend on March 7th. He said: "This turn of events is not just of deep concern to me but to all my fellow Americans who cherish our freedom to travel abroad. I have not been given any reason as to why. I am grateful for your support and look forward to visiting Toronto in the near future."

Mr. Khan, who gained international notoriety after speaking at the Democratic National Convention in July, has been a citizen of the United States since 1986. According to The Toronto Star, which interviewed Khan last week in anticipation of his visit, Trump's travel ban for citizens from six Muslim-majority countries would not apply to Khan, nor would the Trump administration's increased deportations of migrants. "I get offers outside the U.S. I have invitations to go to Sweden, Germany, Oxford," Khan told The Star.

While Trump's travel ban wouldn't apply to Khan, there have been recent reports of incidents at the U.S.-Canada border. CBC News reports that Manpreet Kooner, a Canadian citizen, was allegedly turned away at the border this weekend by U.S. Customs and Border Protection after being held for six hours. According to CBC, "Kooner's story is the latest in a string of recent tales involving Canadian travelers scrutinized or turned away by U.S. border agents."

At this point, it's unclear how the cancellation of Khan's event might fit into the larger story of discriminatory practices at the U.S. border. What is clear is that many folks in Toronto are disappointed at missing the unique opportunity to hear from Khan.