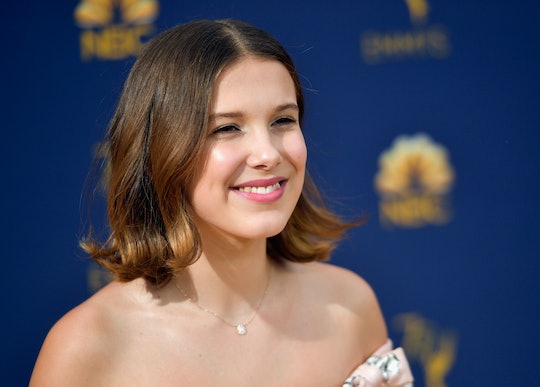 So many of Hollywood's seasoned celebs captured the attention of viewers at home as they walked the red carpet on Sunday night. And, of course, people were on the look out for their favorite celebrities to make their debut. But a lot of people's favorite stars were missing from the carpet, like Millie Bobby Brown and her Stranger Things cast members. So why wasn't Millie Bobby Brown at the 2019 Golden Globe Awards?

The actress, along with the rest of her Stranger Things cast members, did not show up to the 2018 Golden Globe Awards, much to the disappointment of fans. After all, it's been a long time since people have seen Brown grace a red carpet. I mean, it's been a little less than a year since Brown took the red carpet season by storm and an even longer time since a new season of Stranger Things premiered on Netflix (Season 2 debuted in October 2017). Needless to say, a lot of people were bummed that Brown and the rest of the Stranger Things cast were no-shows on the Golden Globes red carpet this year.

But there could be a very simple reason why Brown was not on the red carpet this year; Stranger Things was not nominated for an award at the 2019 Golden Globe awards.

Instead of getting prepped for the award show, Brown's Instagram Story on Sunday showed that she was more focused on saying goodnight and getting some sleep at home.

Brown's presence was certainly missed, especially after the statement she had made last year with her appearance on the red carpet. Last year, celebrities wore all black to protest sexual assault and gender inequality in Hollywood, standing in solidarity with the Time's Up movement. Brown was among these celebrities to wear black to show their support, and she looked absolutely amazing.

But that isn't to say that there wasn't some controversy surrounding her appearance at last year's award show. Brown surprised a lot of people when she took to the red carpet alone, instead of walking in a group with the rest of her Stranger Things cast members, according to NME. But she had a perfectly logical explanation — she was taking her time getting ready and couldn't make it in time to walk with the group.

It might be hard for Brown to top her future Golden Globes appearances after her experience in 2018. Brown reportedly started the evening by texting Ariana Grande about her dress (naturally), according to Billboard, and ended the night by reportedly hanging out with Drake at the Netflix Golden Globes afterparty, according to TIME. She even documented this in an Instagram post later that evening to show everyone just how good of a time she had (seriously, not jealous or anything).

Although she didn't start off the year by walking the red carpet walking the Golden Globes red carpet, there is no doubt that 2019 is definitely going to be an amazing year for Brown. Stranger Things Season 3 premieres this summer, according to CNN, and if it's anything like the last two seasons, then it's going to be the show to watch.