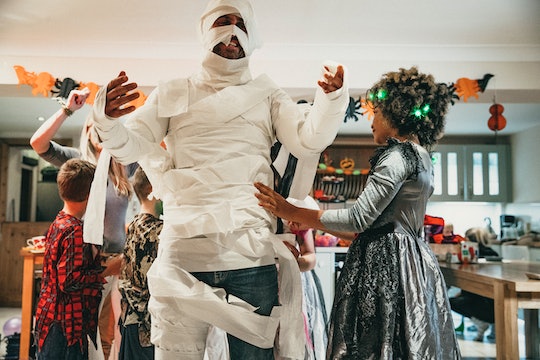 Last week, the CDC released guidelines for celebrating Halloween during the COVID-19 pandemic. Assorted activities were ranked from lower to higher risk and, much to the chagrin of many a child and parent, some of our most favorite ones — hayrides, haunted houses, costume parties, and door-to-door trick-or-treating — were relegated to the danger zone. But while no one likes being told our beloved annual traditions might not be a great idea in 2020 (what is?), I am here to assure you that we will be fine without Halloween this year.

Let me give you a little bit of context for this statement: I have literally never met another grown adult who loves Halloween more than I do. I'm sure there are people who love it as much as I do — Neil Patrick Harris and David Burtka seem strong contenders, what with their whimsical family costumes that make me resentful of my own non-compliant family, who refuse to take part in my Halloween vision — but in my heart, I don't think anyone, not even NPH himself, takes more joy in Halloween than I do. Putting a life-sized skeleton up in my front yard makes me feel (ironically) alive. Pumpkin picking is a pilgrimage. Deciding what costume I'm going to wear every October 31 is my Oscar night. I share the extent of just how corny I am for this holiday to assure you that I do not say "We will be fine without Halloween" lightly. But I said what I said, so allow me to break it down...

First of all: we're in a pandemic, people. Perhaps you've noticed. And it's a pandemic the likes of which we haven't seen in 100 years. This isn't an overblown flu. It's certainly not some sort of Democratic hoax or ploy so Bill Gates can microchip us. It's real, and so is the body count it has left in its wake. So perhaps urging a gaggle of children to gather around a candy bowl held by a stranger breathing on them over and over throughout the night isn't the best idea at the moment. Ditto cramming 100 costumed people in a one-bedroom apartment while "The Monster Mash" plays on repeat. To protect our communities, we're going to have to do things a bit differently for a while.

Look, I know everyone is a little (lot) bit on edge, overwhelmed, exhausted, and frazzled right about now, and it can be easy to feel like the universe is conspiring against you personally. But these guidelines aren't personal. The CDC didn't maniacally rub their hands together and ask, "What can we do to really stick it to [your name here]? It won't take much to get her to snap." This is something we all have to do.

Second: Halloween isn't actually canceled. OK, Halloween as we know it probably won't happen, and that's, honestly, a small price to pay to keep people safe in the midst of a virulent pandemic, but it's not like Halloween has been banned. (And places where that was attempted quickly changed their tune.) Because the CDC is not saying you can't do anything — it's not even telling you what you should and shouldn't do. All the organization has done is let people know about a spectrum of safety so that they can make informed decisions for themselves and their families. So if you want to do traditional trick-or-treating, fine, I guess. (Though maybe don't be surprised when your elderly neighbors don't answer the door this year.) But with some tweaking (sometimes very minor tweaking), there are lots of traditional activities we can enjoy this year.

"But virtual costume contests?!" you may say. "Staying in on Halloween?! That's not the same! My kid deserves to have a childhood!"

Again, I understand the disappointment. The fun of holidays, for me, is sharing the traditions I enjoyed as a child with my own kids. But here's the thing: kids don't have all that many holidays under their wee belts just yet. For them, holidays aren't about tradition, but novelty. As such, we're in a great position to make, and not just follow, holiday traditions. So who's to say your kid won't enjoy a costumed, candy-laden scavenger hunt in your yard with a couple of friends in their social pod just as much as trick-or-treating? Or picking up spaced-out goodie bags through your neighborhood rather than going door to door? Give them something — anything — out of their everyday norm and they're going to go nuts. And good news: kids are very young and inexperienced so your options are wide open. More good news? Kids' enthusiasm is contagious as hell (pardon the epidemiology metaphor). There's plenty of room for happy childhood memories this Halloween: they're just not going to look identical to our happy childhood Halloween memories. (Which might be for the best. Remember how crappy Halloween costumes used to be in the '80s and '90s? Like, a bad mask and a plastic smock is not an accurate She-Ra costume, you guys.)

Remember How the Grinch Stole Christmas? Where the wicked, small-hearted villain takes all the presents and decorations and roast beast, but then all the Whos down in Whoville still sing and the Grinch realizes "He hadn't stopped Christmas from coming! It came! Somehow or other, it came just the same!" OK, so that, but instead of the Grinch, it's COVID and instead of Christmas, it's Halloween. Because Halloween is like that, too. It's something kids know intrinsically and most adults forget: if you hold space for Halloween, and get just a little bit creative, not even COVID can stop it.