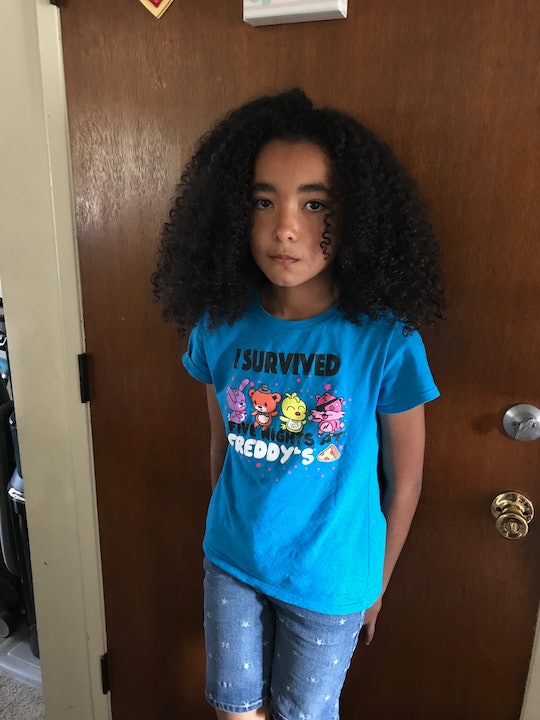 Why We Shouldn't Call Girls "Tomboys"

Growing up, I was called a tomboy a lot. I typically wore jeans, an oversized t-shirt and sneakers. I didn't wear jewelry or makeup and I was more interested in basketball than doing my hair. Not because I played basketball, but because I liked basketball shoes. I have four kids now — three girls, and I don't know the last time you checked the girls' section of a clothing store, but there are A LOT of t-shirts with unicorns, cute kittens, hearts, rainbows, stars, pink, purple, and so on. My twin daughters Mia and Laila like the cutesy shirts for themselves, but my eldest Anneka wants to check out the boys' section. And I'm perfectly OK with that. She has her own style, but for the love of, can we please not call her a "tomboy"?

In the past, Anneka has been teased for wearing boys shirts to school. As a family who listens to Korean pop music (K-pop), my daughter looks up to kpop singer Amber Liu, who is from Los Angeles. Amber is one of the few, and perhaps the first, K-pop star to dress "like a boy" as they say. Instead of wearing the tight revealing skirts and dresses, Amber tends to wear shorts or pants. I became a fan of hers first, then introducing her group, f(x), to my children and husband. They quickly became fans and I noticed how Amber stood out from the other girls in her group. Though just as pretty and attractive as the other four in her group, she stood out for what she wore. After looking up her bio online and finding several interviews with her, I began to like Amber Liu more than any other K-pop star. And so did my daughter, Anneka.

She noticed how Amber was able to wear what she wanted to, both on and off the stage, and seemed comfortable in who she was. Amber has been a great role model for my daughter. The more Anneka sees young women who are comfortable in who they are and aren't ashamed to be who they want to be, the more she feels comfortable. And of course, she's never been treated differently in our house just because she prefers not to wear dresses.

Even as famous and beloved as Amber Liu is, she still has to deal with negative attention for "being different." She recently made a YouTube video that went viral that responding to all of the hate comments she receives online on a regular basis. Of course, it was meant to be funny and it was and garnered a lot of attention, it is still a reality for someone like Amber just because she doesn't fit that mold of what some people think girls should look like.

Calling girls "tomboys" has always sounded negative to me. It's Othering —you're telling a little girl that she is the opposite of what she should be. As children, we are told that boys dress for sports and rough play. Girls are "supposed" to wear skirts, dresses, frilly cutesy clothing. Little girls are discouraged from rough play and sports. They are expected to be lady-like and shrink themselves as people. Be delicate, be soft. I was even told to "sit like a lady" as a kid or act more lady-like. These are things that have never been said to my daughters, especially not by me. Why can't girls wear what they want to without being labeled?

These kinds of comments make it hard to discover who you truly are.

Honestly, it's offensive. It's offensive to tell a girl that she's trying to "be a boy" just because she dresses the way she wants to dress. I have never made my daughters wear dresses, like the color pink or want to watch shows that are geared towards girls. If they like these things, that is entirely up to them. All three of my daughters like My Little Pony, but not because I told them to. And not because they are girls and are "supposed" to like My Little Pony. Actually, my girls tend to like more things that are geared towards boys when advertised. They like things like Skylanders, Five Nights at Freddy's, and Pokemon. They consider themselves gamers and artists, which is awesome. My daughters know who they are and we tend to tell them to like what they want to like, and not because someone told them, either at school or from family or friends, what they "should like."

When I asked my daughter, Anneka, how she felt when a boy told her she was wearing a "boy shirt" and teased her about it, she said it made her feel both sad and mad. As she said, what is wrong with wearing a shirt from the boy section? Also, at this time there were no shirts for girls that had the game Skylanders on them. Now, you can find "girl" versions of video games and things like Teenage Mutant Ninja Turtles, but they all have lace, or pink. Why assume that girls like pink or lace?

Most importantly, I think it's terrible when we label our kids. Labelling a child in any way, especially to them, gives them preconceived notions about themselves and how they should be or are supposed to be. I don't want my daughter having any kind of idea about who I expect her to be because it keeps her from finding her true self. As a child, I was told that I was certain things: lazy, too sensitive, and I was even called a tomboy myself. All of these things permeated my mind and, depending on who tells you these things, you kind of assume that that's who you are. These kinds of comments make it hard to discover who you truly are.

One of the great things about having a kid is finding out who they are and letting them reveal themselves to you. As I go through this journey with all four of my kids, I'm finding out little by little who they are and seeing them develop these personalities and preferences. Sometimes they don't like music that I like, and that's perfectly okay. Sometimes I don't like a song or movie they like, and they know that's okay also because as human beings, we're all different.

As I would never tell my son to "be a man" or tell him that liking certain things are girlie, I would never allow another person to say these things to him also. So when my daughters have come to me in the past, saying someone called them tomboys or made a comment about their Batman water bottle or Superman hat, I told them how important it was that we don't gender things like clothing because in the end, it's all about what they like. Girls should be allowed to be who they want to be, dress how they want to dress and like what they want to like. If my daughter prefers Pokemon over Disney Princess, that's perfectly OK.