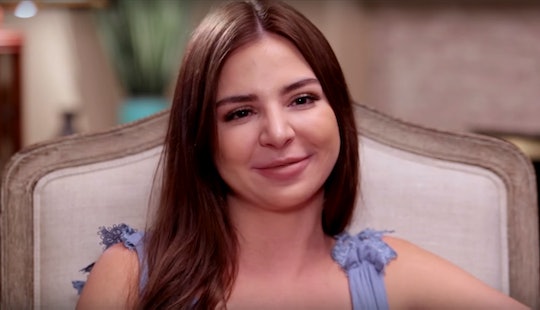 If it isn't enough that there are struggles that come along with marrying someone after just 90 days, the men and women of 90 Day Fiancé: Happily Ever After? now have to contend with added drama between each other. Anfisa Arkhipchenko and Paola Mayfield have never really been cordial and things got even worse during this season’s tell-all. So, why were Paola and Anfisa fighting on 90 Day Fiancé exactly?

The big feud began at the Season 2 tell-all when Paola, along with former 90 Day Fiancé co-star Loren Brovarnik, called Anfisa a gold digger and questioned her motives for being with her husband, but things only got worse from there. Both women took to social media to explain their individual reasoning for their ongoing feud and clear the air, though it seems pretty obvious that neither woman is willing to make amends anytime soon.

When one fan on Twitter said that they’d like to see Anfisa "knock Pao out," Paola responded with, "Me too! I would like to see her try. Even tho I wouldn’t like to get into her street fighting level. I’m better than that." Later, she tweeted that part of the reason for "hating" Anfisa and fighting with her was her husband, Jorge Nava. "I felt sorry about Jorge because I thought he was the 'victim' now I don’t care about them anymore!" Paola wrote. "He was the one who makes us hate her!"

And during an Instagram live Q&A session with fans, Anfisa said that Paola and Loren had teamed up against her to "try to stay relevant and deflect from their own problems."

Neither woman seems ready to bury the hatchet or solve their problems anytime soon, so their on-screen fighting has been a major plot point the past two seasons on the show and, especially, for the tell-all specials at the end of Season 2 and 3.

Since then, the two women have gone back and forth on 90 Day Fiancé and as viewers saw on part one of the tell-all, neither seem intent on kissing and making up. To be fair, their dislike for each other seems to go back pretty far, so it might take more than some filmed confrontations for either of them to see eye to eye ever again.

Things might have been squashed between them backstage at the tell-all special, but when Paola approached Anfia to possibly make amends, Anfisa opted to ignore her right out the gate, furthering their feud and squashing zero beef. The women actually come as close to real blows as they’ve come yet and attack each other on-stage, on TV, at the reunion. Basically, it was like a Real Housewives reunion meets Bad Girls Club.

My guess is that all of the pent up anger and animosity toward Paola finally bubbled to the surface for Anfisa and she charged at her fellow co-star, which of course prompted Paola herself to retaliate. It was all a big mess and didn't solve anything between the two women. But like I said, I highly doubt any of their problems are going to be solved anytime soon. Until something drastically changes or one of the women decide to give up this running feud between them, I don't see any big changes coming to their on-screen fighting and social media word vomit.