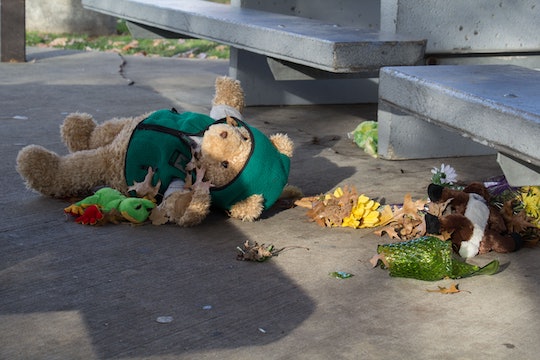 Why Weren't The Officers Charged In The Tamir Rice Case? It All Came Down To 6 Video Frames

On Monday, outrage was at an all-time high as prosecutors announced that the Cleveland officer who fatally shot 12-year-old Tamir Rice will face no criminal charges. While the November 2014 incident involving the child found to holding a pellet gun was highly controversial, prosecutor Timothy J. McGinty claimed enhanced images were a huge factor in the Ohio grand jury's determination, according to The New York Times.

McGinty called Officer Timothy Loehmann’s acton’s "reasonable" but called the 12-year-old’s death an "absolute tragedy." Despite this, he explained the officers actions as "not, by the law that binds us, a crime," according to CNN. Also pointing out that civil court may lead to an outcome that the Rice family “deserve,” he commented that this "doesn't mean the legal system is done.”

Simply put, given this perfect storm of human error, mistakes and miscommunications by all involved that day, the evidence did not indicate criminal conduct by police.

The crux of the case lay in six video frames which depict the moment Officer Loehmann shot and killed Rice. McGinty said the images make it “indisputable that Tamir was drawing his gun from his waist as the police car slid toward him and Officer Loehmann exited the car." As reported by The Times, the first surveillance photo allegedly shows Rice moving his arm down waistband toward the pellet gun — an assertion scrutinized by the Rice family. While experts hired by the family claim the second image shows the Officer opening his door while the 12-year-old’s hands are in his pockets, the prosecution believe Rice was still reaching towards his waist. The family also claims Officers Loehmann and Frank Garmback couldn’t have yelled for Rice to show his hands as the car windows were closed.

Images four through six show Officers Loehmann fatally shooting Rice. Though the family claims the fourth slide shows his arm jerking up because he was being shot, Loehmann claims Rice “knew it was a gun and it was coming out.” Since the shooting occurred so quickly after approaching Rice, the family believes his gun was already out and ready. Frames five and six reveal the 12-year-old falling to the ground and Officer Loehmann rushing to the back of the car as “I didn’t know if the threat was over,” he explained.

Aside from the video, there were other reasons given by McGinty as to why Officer Loehmann won’t be charged — and one has been widely scrutinized. Though the prosecutor acknowledged that both Rice and Loehmann were “no doubt frightened,” he also pointed out that 12-year-old’s stature played a role in his death, as he explained during Monday's press conference:

If we put ourselves in the victim's shoes, as prosecutors and detectives try to do, it is likely that Tamir, whose size made him look much older and who had been warned that his pellet gun might get him into trouble that day, either intended to hand it over to the officers or show them that it wasn't a real gun. But there was no way for the officers to know that, because they saw the events unfolding in front of them from a very different perspective.

Following the state’s decision to not indict the Cleveland officers, Rice family lawyer Subodh Chandra released a statement saying that “Tamir's family is saddened and disappointed by this outcome—but not surprised.” Though they are upset about how they believe “prosecutor McGinty has mishandled the grand-jury process [and] has compounded the grief of this family,” Chandra hints that they aren’t finished seeking justice for Tamir:

The Rice family is grateful for all the community support they have received and urges people who want to express their disappointment with how Prosecutor McGinty has handled this process to do so peacefully and democratically. We renew our request that the Department of Justice step in to conduct a real investigation into this tragic shooting of a 12-year-old child.