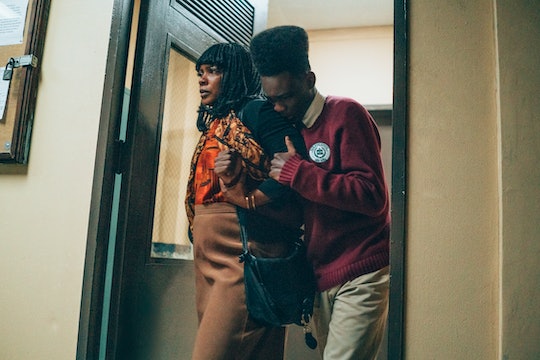 Ava Duvernay’s Netflix series, When They See Us, tells the true story of five young men who were wrongfully convicted of a rape and assault in 1989. Their heart-wrenching experiences are a reminder that racial identity and the presumption of guilt are still interchangeable today, and as a mom of two minority children, it’s a terrifying thought. That’s why When They See Us prompted me to talk to my kids about racial profiling.

Racial profiling is something I never thought much about growing up in Chicago in the ‘80s. I was a practicing Muslim kid who lived a normal American life. Though kids teased me about my Eid henna, often calling me “diseased” or “weird,” my parents always taught me to be proud of who I was. I didn’t let it bother me. But the world changed post 9/11 and so did what it means to be Muslim in America. Now, I find myself overly conscious of my faith and identity and how it is perceived.

When They See Us highlights the systemic racial discrimination a group of black and Latino teens faced when they were charged and publicly vilified for a crime they didn’t commit. The first two episodes detail how Raymond Santana, Kevin Richardson, Antron McCray, Yusef Salaam, and Korey Wise are arrested for “wilding” in Central Park, but later accused and charged with the completely unconnected rape and assault of a white female jogger, Trisha Meili.

The series depicts how their racial profiles made them an easy scapegoat for police and prosecutors, who used questionable tactics like sleep deprivation, starvation, and intimidation to coerce false confessions out of the teens.

When talking to Color Lines, Salaam described the fear he felt during the initial police interrogation. “Soon as we get in, they separate us,” he said. “And they start working on us. And, I’m hearing Korey being physically beaten in the next room and I’m immediately beyond afraid.”

I wanted to fight with the people behind the counter and yell about how ludicrous this was, but out of fear of making things worse for myself, I went along.

That’s a horrifying thought for a parent, to know your child is being mistreated and accused of something, solely based on the color of their skin. When talking about racial profiling with my own kids, part of me wants to tell them to stand up and fight for their rights, but the other part of me wants to tell them to do whatever it takes to de-escalate the situation. In the first episode of When They See Us, there is a scene in which Antron McCray’s father tells him to cooperate with the police and do whatever they say. While watching, I wanted him to stand up and defend his kid, but on the other hand, I knew that the consequences he could face for fighting back would be worse. And I could totally relate.

Once, when traveling with my 3-year-old daughter from New York to Chicago, upon check-in I was told that my daughter's name was on a terrorist watch list and we may not be allowed on the flight. I was pregnant at the time, traveling alone, and all I could do was be patient. I wanted to fight with the people behind the counter and yell about how ludicrous this was, but out of fear of making things worse for myself, I went along. I had no other choice. I finally made it on to the flight with my daughter, but only after two stressful hours of waiting, explaining, and re-explaining that my daughter was only 3 years old. All this drama, only because she has a Muslim name.

Sometimes, depending on where we are, I tell my children to refrain from advertising their religion. On flights, I tell them not to use Arabic words like “Inshallah” (God willing), because I know people have been thrown off of planes for speaking as much. But when they ask me why things are this way, I only have one disheartening answer: “Some Muslims did really bad things, and now some people think we are all the same.” It’s not an easy concept to swallow as an American, let alone justify to your kids, but it’s the unfortunate truth.

According to a March 2019 Pew Research Poll, 82 percent of Americans say that Muslims face at least some discrimination in America, surpassing other major groups, such as people who are black, Hispanic, Jewish, trans, LGBTQIA, or women. Nearly half of American Muslims say they have experienced discrimination themselves, including instances of being treated with suspicion (32 percent), getting singled out by airport security (19 percent), being called offensive names (18 percent), getting singled out by law enforcement (10 percent) and being physically threatened or attacked (6 percent), according to a 2017 Pew survey of Muslim Americans.

And it’s a truth that communities of color are forced to face everyday. In the case of the Central Park Five, the New York Times reported that despite knowing that there was no evidence linking the five kids to the crime, police officers and prosecutors still set them up to take the fall. There’s no question that race played the biggest role in their conviction and the world watched as these young innocent men went to jail.

While watching the series, I couldn’t help but think of Adnan Syed, the subject of the 2014 Serial podcast. Syed, an American-Muslim teen, was charged with the murder of his ex-girlfriend Hae Min Lee in 2000. Because of the lack of evidence in the case, many believe he was wrongfully convicted of the crime. But regardless of his guilt or innocence, it was the use of his religion in the case that I found very disturbing. In an op-ed for the Baltimore Sun, the South Asian Bar Association of North America pointed out that Syed’s faith and culture were used against him throughout his trial. According to the piece, the prosecutor introduced Syed as a “Pakistani” and a “Muslim” in court, and encouraged the jury to consider his “Islamic culture” as motive for the crime, contending that he committed the murder because "his honor was besmirched" and that his "religious beliefs" drove him to kill.

These stories show how race and religion are used as a blatant weapon by the justice system. Perhaps not everyone sees Muslims as barbaric terrorists and not every police encounter with an unarmed black man ends with violence. But this discrimination happens often enough to highlight the systemic racism minority communities face. And when a man like Donald Trump is elected to the highest office of the land, the dog whistles come straight from the top.

As reported by Esquire, in 1989, when the Central Park Five were arrested, Trump took out a full page ad in four of New York City’s major newspapers, calling for the return of the death penalty. "At what point did we cross the line from the fine and noble pursuit of genuine civil liberties to the reckless and dangerously permissive atmosphere which allows criminals of every age to beat and rape a helpless woman and then laugh at her family’s anguish?" he wrote. "I want to hate these murderers and I always will. I am not looking to psychoanalyze or understand them, I am looking to punish them … I no longer want to understand their anger. I want them to understand our anger. I want them to be afraid."

The president's clear bias against Muslims and people of color makes me believe that racial profiling is not about to stop, which presents a real danger to my daughters.

CNN reported that when the real rapist, Matias Reyes, confessed to attack on Meili in 2014 (DNA evidence confirmed his guilt), all five men were exonerated on all charges. They spent six to 13 years in jail for a crime they didn't commit, but Trump still wouldn’t accept the fact that they were wrongfully accused. "They admitted they were guilty," he said in a statement to CNN's Miguel Marquez. "The police doing the original investigation say they were guilty.”

Trump has made plenty of racist statements in the past, but the one that jumps out at me personally is when he told CNN’s Anderson Cooper that he thinks “Islam hates us.” When I think about Trump’s “Muslim ban” — which the ACLU describes as an Executive Order banning foreigners from seven predominantly Muslim countries entry into the United States — and his anti-Islamic rhetoric, it’s genuinely terrifying. A recent Rasmussen Poll found that nearly half the country (48 percent) supports this president, and I can’t help but wonder if they agree with his sentiments.

The president's clear bias against Muslims and people of color makes me believe that racial profiling is not about to stop, which presents a real danger to my daughters. I find it increasingly necessary to talk to my kids about race and identity, but at the same time, I continue to remind them of the Constitutional rights and freedoms they hold as American citizens.