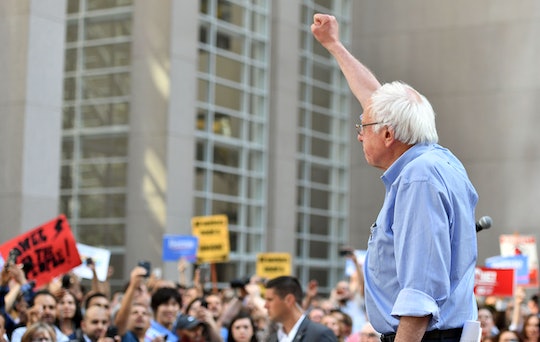 Why Won't Bernie Sanders Drop Out Of The Race? It's Not About Him Anymore

When it comes to the primary race, Vermont Sen. Bernie Sanders has been steadily staying the course, despite frontrunner Hillary Clinton's high delegate count and the assumption, made by many, that she will ultimately clinch the Democratic nomination. On the Republican side, things have been simpler: business mogul Donald Trump has emerged as the presumptive nominee as other contenders have slowly laid down their arms and dropped out of the race. So why won't Bernie Sanders drop out on the Democratic end?

After all, it's a move that Clinton would appreciate, and, judging by her recent comments to CNN, one that she expects. "I will be the nominee for my party," she said. "That is already done, in effect. There is no way that I won't be."

Considering that Clinton has 2,293 delegates (including 525 superdelegates) to Sanders' 1,553 (with 39 superdelegates), one might understand why Clinton is so confident — and why Democrats concerned about party unity are so agitated. Sanders supporters desperately want to see the change the Vermont leader has offered, despite their own admittance that it would take a miracle or two for him to win the race this late in the game. At times, that frustration has resulted in supporters lashing out at party officials, according to the BBC.

However, Sanders doesn't intend to give up the good fight until the Democratic National Convention in July, a fact that he's made abundantly clear. He recently told CNN's Jim Acosta that he gets asked about the pressure to drop out an overwhelming number of times a day. And yet, in a statement issued by Sanders near the end of April, he said:

The people in every state in this country should have the right to determine who they want as president and what the agenda of the Democratic Party should be. That’s why we are in this race until the last vote is cast. That is why this campaign is going to the Democratic National Convention in Philadelphia with as many delegates as possible to fight for a progressive party platform.

Sanders wants to be president, yes — but he's also been calling for a "political revolution" since he first launched his campaign. Sanders is no fool, and he knows that he likely won't reach the White House ("It's a narrow path," he told CNN in April). But what Sanders has been adamant about for years now is changing the way political campaigns are run, making education and healthcare affordable and accessible, and bringing wide-scale change to corporate America.

By staying in the race until the last possible moment, Sanders is giving his supporters a platform to send politicians in the U.S. a message: they're saying "this is a change that we want." Many people do think this country needs a radical change. The growth of Sanders' campaign surprised the American public because it embodied a growing movement of people tired of the current system — and the United States was surprised by how many people did, and still do, want the dramatic change Sanders is talking about. And that's why he's staying in the race — it's not about him, it's about the movement he's galvanized. Even if that revolution does not happen right now, with this presidential election, by staying in the running until the bitter end, Sanders is giving his supporters a platform to voice their desire for change for as long as he can.