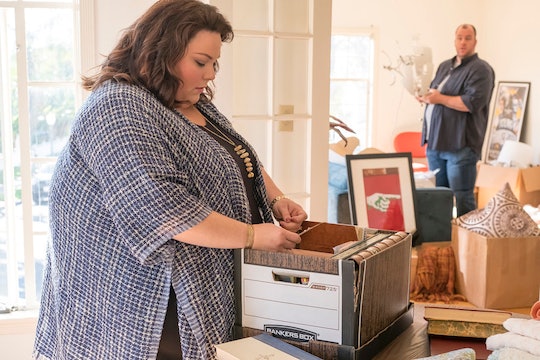 Jack's Death On 'This Is Us' Is Hard For Kate

On This Is Us, Kate and Toby's relationship has always been two steps forward and three steps back; despite how much they love each other, they have trouble getting on the same page. Lately one of their biggest roadblocks involves Kate's struggle to open up about her father's death. This is something that's been hard for her since the beginning; even when she first opened up to Toby about her yearly Super Bowl watch with his ashes. Kate never voluntarily talks about her father's death, and despite their engagement Toby still doesn't know all the details. But why won't Kate talk about Jack's death on This Is Us?

Kate definitely has a lot of trauma associated with Jack's untimely departure from this world, as evidenced by the outpouring of emotion she had over it during her time at weight loss camp. The most obvious reason for her silence on the matter is that it's simply too difficult for her to talk about and so scarring that she has to keep it bottled up or she'll fall apart. But without knowing the details, it's hard to know more; Kate could feel responsible or blame herself for his death if she was somehow present for it, or involved in the events that led up to it. Or it could be a much less dramatic reason. Maybe losing the father who had loved her so unconditionally was just too painful for Kate to process.

After the reveal that Jack was dead, actress Chrissy Metz told TooFab.com, "The things that happen in our lives shape us into the people that we become. Jack's death was absolutely that for everyone, for the kids obviously and for one person in particular. We're going to find out who that is." It seems clear now that that person is Kate, and it seems like Jack's death may have hit her the hardest because she was the one who was closest to him.

Series creator Dan Fogelman has also spoken about how loss can affect a family, citing his own struggle with grief following his mother's death as something that influenced This Is Us. He called his mother's death "the hinge upon which my life hinges," telling Entertainment Weekly:

It was the moment at 31 years old – there's a 'before that' and there's an 'after that' for me – and I think that's what [Jack's death] was for them. For me, personally – and all I go by is my own experience – I have a hard time even to this day talking about the how and the when of it. It's not something I'm real capable of getting into, and I went briefly to therapy. It's just something that's kind of locked unhealthily away.

Though Fogelman is speaking about his own experiences, his statement gives some insight into how Kate is feeling. Her inability to speak about Jack's death may not come from personal responsibility, but shock and trauma; the sudden and unexpected loss of a loved one is hard for anyone to cope with, and Kate was still just a teenager when it happened. Now that she's kept it locked up for such a long time, it's even harder to let all that pain out. It won't be an easy journey, but it seems like Kate may have to open up before she can begin to heal.