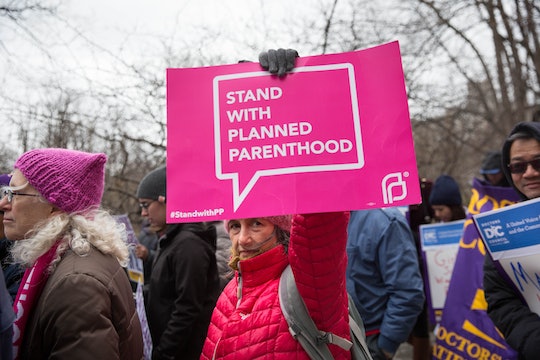 It's no secret that anti-choice politicians have been determined to find a way to defund Planned Parenthood for years, even though federal dollars are not used for abortions with the exception of a few extenuating circumstances. But now the tables have turned as Planned Parenthood won't accept Title X funding as of Monday, meaning the organization will no longer receive around $60 million in funds from the federal government. After the decision was announced, some raised questions about why this change happened. As the organization noted, the Trump administration's abortion "gag rule" is at the center of this switch.

On Monday, Aug. 19, Planned Parenthood officially withdrew from Title X, a federal family planning program, according to The New York Times. As a press release detailed, Planned Parenthood was forced into doing so because of a new Trump administration rule that restricts what healthcare providers can say about abortion. Known commonly as the "gag rule," this directive allows clinics accepting Title X funding to continue speaking to patients about abortion, but disallows these centers from referring patients to an abortion provider or to share information about where to obtain an abortion, according to Politico.

The Trump administration did not immediately respond to Romper’s request for comment regarding the gag rule and Planned Parenthood's decision.

As one can imagine, this is kind of a big deal. That's because, as Planned Parenthood and a number of other organizations (like the American Medical Association) have pointed out, the new rule would involve withholding medical information from patients, interfering with the doctor-patient relationship, as well as denying pregnant woman the options that are available, according to NPR. These are all serious ethical compromises Planned Parenthood just isn't willing to make.

Alexis McGill Johnson, acting president and CEO of Planned Parenthood Federation of America, touched on this sentiment in a statement shared with Romper via email.

“I want our patients to know: while the Trump administration may have given up on you, Planned Parenthood never will," Johnson says. "Our doors are open today, and our doors will be open tomorrow. The Trump administration’s gag rule will reverberate across the country. This reality will hit hardest people struggling to make ends meet — including those people in rural areas and communities of color."

Johnson also accused the Trump administration of "doing this as an attack on reproductive health care," in a supposed effort to keep providers like Planned Parenthood from helping their patients. Her statement continues:

Health care shouldn’t come down to how much you earn, where you live, or who you are. Congress must act now. It’s time for the U.S. Senate to act to pass a spending bill that will reverse the harmful rule and restore access to birth control, STD testing, and other critical services to people with low-incomes. People’s lives depend on it.

It's worth noting that Planned Parenthood's health centers have been a part of Title X since it was created almost 50 years ago, according to a news release. What's more? Planned Parenthood serves 40 percent of all patients who receive care through Title X, translating to more than 1.5 million patients.

In addition to Planned Parenthood's response, NRAL Pro-Choice also released a statement on Monday about this attack on women's reproductive health.

“By forcing Planned Parenthood out of the Title X program, Trump is fulfilling his debt to the anti-choice movement — a vocal, extreme minority in this country — for their work to put him in the White House," NARAL Pro-Choice America President Ilyse Hogue said in a statement, according to NARAL Pro-Choice America's website. "Millions of women and families who rely on Planned Parenthood for a full range of reproductive healthcare will be forced to pay the price for political payback by the Trump administration and their reckless Title X gag rule."

The decision about when and with whom to have a family is one of the most personal and important decisions a person will ever make, and it’s definitely one that should be free from political interference.

Back in March, Planned Parenthood and the AMA sued the Trump administration to block the Title X rule. Despite the fact that three district courts in the circuit blocked the gag rule, the 9th Circuit Court of Appeals allowed the rule to take effect in July 2019. Those cases are still playing out, and the 9th Circuit is scheduled to hold oral arguments on Sept. 23.

So technically, this fight isn't over. But the future for Planned Parenthood and the over 1.5 million patients who have relied on Title X thus far is still uncertain, which is why pro-choice advocates should continue to donate to the organization and support it politically.