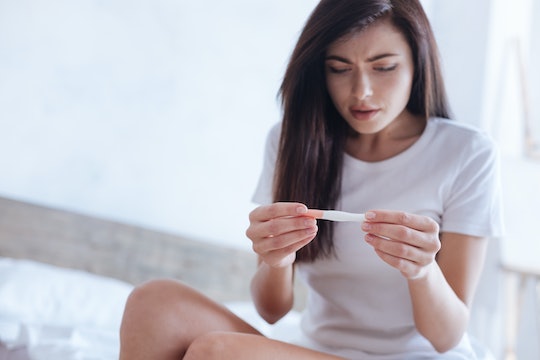 When you're TTC, your life revolves around when you ovulate, timing sex for ovulation, and panicking about why you would ovulate late. You check your temperature, pee on more sticks than an overexcited puppy, and check your cervical mucus with the intensity of a field scientist. Unfortunately, the human body is a fickle thing, and it seems like just when you get a handle on when you should be releasing that egg, nothing happens. It's tardy. What is happening in your reproductive system?

To get to the bottom of why you would ovulate late, I spoke with certified nurse midwife Michelle Collins, Ph.D., the associate dean for academic affairs, and professor of women, children, and family nursing at Rush University's College of Nursing. She tells Romper that there are a ridiculously large number of reasons why you might be ovulating later than you expected to be, including "medical illnesses that can cause delayed ovulation." Being sick really does a number on you, and when your body is thrown out of whack, it affects all the systems.

Collins says that this just means that late ovulation "can be due to recent acute illness — like a viral or bacterial infection, because those stress the body," and shift the timing. Also, medications or stress, whether it be physical or emotional in nature, can do the same.

The period and fertility tracking app Flo reported that while most people who get periods will ovulate between the 11th and 14th day of their cycle, some will ovulate sooner or later than that, and that only if the ovulation occurs after the 21 day of the cycle is it considered "late." Medications, hormonal imbalances, breastfeeding, thyroid issues, and reproductive dysfunctions like polycystic ovarian syndrome (PCOS) can all contribute to delayed ovulation. If you know you have a longer cycle, that 21-day window might be pointless to remember, too.

Having endometriosis and PCOS myself, I would be remiss if I didn't mention that the term "regular ovulation" means something entirely different for people with reproductive disorders. I am about as regular as a toddler's behavior. When I was routinely testing for ovulation, I found that it happened as early as the 9th day, and as late as the 18th. It was really a crap shoot, and made TTC a huge pain during some cycles. Those test sticks eventually became my personal nemesis, much in the same way I now view my child's reading log.

I also found the theory that stress causes delayed ovulation to be very true. I noted that on months where I would be coming up on a course of IVF or IUI, my ovulation took a few more days than on my more relaxed cycles. It felt like my body was betraying me — after all, I was counting on that ovulation, and it took its precious time coming. The longer it took my body to ovulate, the more stressed out I would become, and the cycle continued.

And there's something else that we need to discuss which can inhibit or prolong ovulation, according to Collins — drug use. She says that any recreational drug use can slow down or prevent it from happening, and it's safest to just abstain entirely. Newsweek reported that even pot can cause delayed ovulation, which is a real bummer for many people, but you don't have to give it up forever. Just maybe hold off while doing the whole creating human life thing.

If you notice that your ovulation is consistently irregular, it's something that you might want to discuss with your doctor if you're trying to get pregnant. It can be frustrating, and it's best to chat with a professional about your concerns.

More Like This
Hocus Pocus Party Inspiration To Put A Spell On Your Guests
31 Sweet & Savory Apple Recipes To Make This Fall
These Oktoberfest Instagram Captions Will Get Likes & Prosts
How To Tell If Someone Is Lying To You: 34 Signs To Watch For