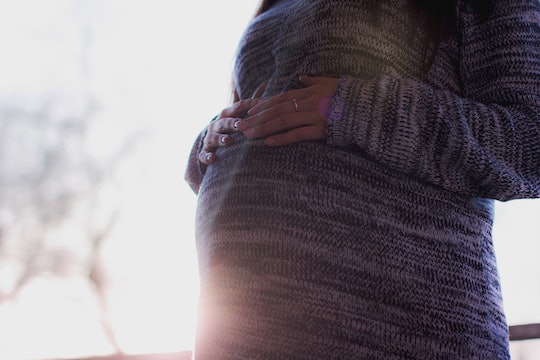 Why You Need To Care About Postpartum Depression, Even If You've Never Had It Yourself

Postpartum depression is something that many, many women have experienced and struggled with, though it's not always something that's openly discussed. After all, the prevailing idea most of us have about new motherhood is that it will be a time of instant, overwhelming joy and love; of connection and fierce mama bear-ness, and cuddles and elation. And while that does happen to many women, it can be incredibly difficult when you don't feel those things. When instead, you feel sadness, or anxiety, or like you have no desire to bond with your newborn you were likely hugely excited to meet only weeks before. Postpartum depression is devastating and heartbreaking and massively misunderstood, and it's why, if you're a parent, you should care about postpartum depression — even if you've never had it yourself.

While postpartum depression is real and isn't in any way a reflection of a mother's love for her child, it can be really hard to even realize you have it, let alone ask for help. And if you've never experienced mental illness, it can be difficult to relate. But that just means it's even more important that we talk about it.

Thanks to new-mom sleep deprivation, fluctuating post-childbirth hormones, and, uh, the massive new life transition of becoming a tiny human's actual mother, it's not uncommon at all for women to experience the "baby blues" in the days following their child's birth. According to a factsheet from the U.S. Department of Health and Human Services, symptoms of the baby blues include feeling sad or anxious, having mood swings, crying, or feeling overwhelmed. It's a struggle for sure (does anyone really expect that they'll feel that way after their sweet newborn comes into the world?), but the good news is, it's temporary, and isn't usually indicative of a disorder. But, according to the American Psychological Association, one in seven women will experience the more severe symptoms of postpartum depression in the weeks and even months following their child's birth, and without help, postpartum depression won't go away on its own.

While not all women with PPD experience the same symptoms, or to the same degree, women suffering with the disorder can have any or all of the symptoms of the baby blues — though they will likely be more prominent and will stick around longer. According to the U.S. Department of Health and Human Services, they might also feel uninterested in their own child, or could be entertaining thoughts of harming themselves or their baby. With treatment (like therapy and antidepressant medication), many women are able to overcome their PPD, but thanks to the stigma surrounding mental health in general, and the feelings of embarrassment and shame that often accompany women who feel like they're already failing at motherhood, many mothers don't reach out for help, even when they need to.

The problem is, it isn't just important that the women suffering from PPD receive treatment, it's also essential for their children. According to Psych Central, a depressed mom will be more likely to have difficulty meeting her child's needs (through no fault of her own), and not only will that be bad for her child's development, it'll also continue to fuel her own depression. Babies of depressed mothers are more likely to cry and be hard to soothe and are also more likely to have difficulty feeding and sleeping.

The reality of postpartum depression is that it is more prevalent than perhaps anybody realizes, which means that a lot of people are suffering in silence — and it actually isn't even specific to women. According to WebMD, as many as 1 in 10 dads can get PPD, which is staggering given that it's mostly considered a women's disorder (and if it's underdiagnosed in women, you can bet it's hardly ever diagnosed in men).

The good news, though, is that studies have shown that treating a parent's depression has a direct effect on the child's well-being — even if the child didn't receive any intervention. That seems like a pretty logical conclusion — wouldn't a non-depressed parent be a better parent? — but it's an important point to note. Even if your postpartum depression has made it hard for a parent to take care of their child, it doesn't mean they can't still be the mother or father they've always wanted to be once they get help and their depression is in remission.

What does all this mean for the average person who has never had PPD, or who may not have even ever have children? It means that almost everyone likely knows someone who has suffered, or who isn't getting the help that they need. Your friends, your family members, your co-workers, strangers on the street. Perhaps your new mom experience has been wonderful, but it's statistically pretty much guaranteed that at least one of the mothers in your Mommy and Me class is having a really, really hard time. Our collective reluctance to speak openly and non-judgmentally about postpartum depression (and mental illness in general), hurts everyone. And the only way around it is to realize that it really does matter, and that treatment needs to be a priority.

If you, or someone you know needs help with postpartum depression, the best thing to do, according to the American Psychological Association, is to seek professional help. Talk to your doctor or a psychologist or other mental health professional. Talk to someone else you trust — your spouse, a friend, a relative — about how you feel, and keep talking about it. Try to find a way to get some alone time, and, if possible, more sleep (I know, I know). Give yourself permission to slack off on housework or whatever it is that doesn't absolutely have to be done so you can ease the feelings of being overwhelmed.

Above all else though, if you feel at risk of hurting yourself or your baby, get help immediately. The American Psychological Association recommends finding a safe place for your baby (like her crib), and calling your doctor, going to your local hospital's ER or calling 911, calling a trusted friend or relative, or calling a suicide hotline, like the National Hopeline Network at 1-800-SUICIDE, or the National Strategy for Suicide Prevention at 1-800-273-TALK (you do not need to be suicidal to call, just in need of some immediate help).

Postpartum depression is awful and crippling and not what any parent hopes for when they first see the positive pregnancy test. But it happens, and there's no shame in that. Speaking up and reaching out is one way that everyone can help lessen the burden of those who are struggling. And it's really important that we do.

More Like This
Julia Fox’s Apartment Tour Is Peak Mom Realness
Does The FDA's Plan To Limit Lead In Baby Food Go Far Enough?
14 Recipes For Sick Kids When Everyone's Tired Of Canned Soup & Crackers
Marie Kondo Gives Up Tidying Post-Kids, Sparking Joy For Moms Everywhere
What Parents Are Talking About — Delivered Straight To Your Inbox