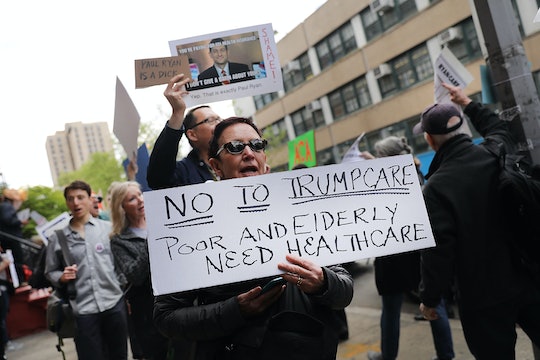 Why You Should Call Your Senator Right Now

On Tuesday, reports began appearing online claiming that journalists in Washington, D.C. were being told they could not film interviews with senators in the hallways of the Senate. If true, that's a disturbing new rule limiting press access to politicians — and it comes at a time when the GOP is attempting to pass the American Health Care Act despite massive backlash from the public. If the reports are true, you need to call your senator right away, because your family's health care — as it currently stands — depends on it.

The AHCA has already passed the House of Representatives, but the Senate's version of the bill has been kept tightly under wraps so far — and according to Axios, there are no plans to publicly release the document. CNBC reported that the GOP's draft of the Senate bill could have been wrapped up as early as last night, and that Republicans plan to vote on the bill by July 4. Senate Democrats have routinely criticized the amount of secrecy Republicans have created around the health care bill, with Tom Perez, chairman of the Democratic National Committee, telling CNBC:

Behind closed doors, 13 Senate Republicans are crafting a mammoth piece of legislation that could dismantle the entire health care system and deprive 23 million more Americans of access to care.

Romper reached out to GOP representatives for comment, but did not hear back immediately.

According to the Congressional Budget Office, the version of the AHCA that passed the House of Representatives could leave 23 million Americans uninsured over the next ten years. The group of 13 Republican senators currently working on a new draft of the bill — and yes, of course, the group is made up entirely of men — will likely change several portions of the House's draft. Exactly what they're changing, however, has so far remained a mystery to the public that would be impacted by those changes.

Republicans need only 50 "yes" votes in order to pass the AHCA, so now is the time for Americans across the country to get to work. Phone your senator now to protest Trumpcare. Especially if you're in one of the 10 key states identified by the Indivisible Project (including Arizona, Colorado, Louisiana, and more), your senator's vote could be critical to making sure the AHCA doesn't pass the Senate.

According to Vox, a Quinnipiac University poll recently showed that 56 percent of Americans disapprove of the new health care bill, while only 17 percent of them approve of it. Republican senators may be trying to keep their health care bill under wraps, but this is a time for more public involvement, not less. Phone your senator today and make sure your opinion — on your health care — is heard.

More Like This
Doctors Swallowed LEGOS To Prove Everything Is Awesome For Kids Who Do The Same
Does The FDA's Plan To Limit Lead In Baby Food Go Far Enough?
Michigan Right-Wing Group Wants To Erase LGBTQ+ Sex Ed
The President Of Ireland Wants To Get Rid Of Homework & Honestly, He's Onto Something
What Parents Are Talking About — Delivered Straight To Your Inbox