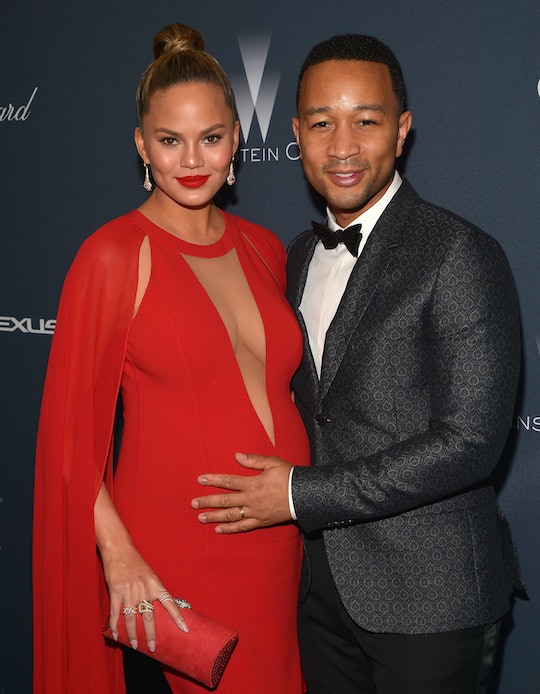 Why You Should Care About Mom Shaming, Even If You Haven’t Experienced It

On TV, motherhood looks more complex than ever. Parks and Recreation's Leslie Knope balanced triplets with a full-time job in government. 30 Rock's Liz Lemon adopted two kids and kept working as head writer on TGS while her husband was a stay-at-home dad. Now, fans are eagerly awaiting the return of Lorelai Gilmore, the character who everyone fell in love with as the coolest single mom in Stars Hollow. If it's easy to cheer for fictional moms who balance careers and social lives with raising kids, why is it so difficult to accept in real life? Even if you haven't experienced it, there are major reasons why you should care about mom shaming.

Model Chrissy Teigen gave birth to her first child on April 14, ET reported. She and John Legend tweeted with total joy upon the arrival of their daughter, Luna Simone Stephens. According to the Internet, it took Teigen less than two weeks after giving birth to make her first mom "mistake." Teigen and Legend went out for dinner the weekend of the April 23, and, according to Cosmopolitan, plenty of people following Teigen's posts on social media had no problem bashing her in the comments for leaving her newborn for the evening. Commenters questioned whether Teigen could possibly be a good mom if she would choose to have a date night so soon after having a baby. Teigen addressed the backlash with a sense of humor:

After the explosive reaction to one dinner out of the house, Entertainment Weekly reported that correspondent Desi Lydic defended Teigen on The Daily Show:

You’re worried about the quality of John Legend and Chrissy Teigen’s child care? It’s not like they’re getting their nanny off Craigslist. They’re rich celebrities. They could get Mary Poppins to watch their baby, as in literally call Julie Andrews, get her to come out of retirement to babysit in character as Mary Poppins.

Legend also stood up for his wife:

The responses highlight the danger of the feedback Teigen received. Anyone who's ever spent more than five minutes with a newborn knows that being a new parent is exhausting; Leaving the baby in vetted hands to take a night off every once in a while isn't selfish — it's just good self-care. But when something as small as going out to dinner is considered a form of negligence, how will it ever be possible for modern moms to comfortably live full lives on their own terms?

It's a fact of the new millennium: Moms are spending more time out of the house. According to the United States Department of Labor, "70 percent of women with children under 18 participate in the labor force." Millennial ladies grew up surrounded by more messages of empowerment than any generation before them. But now that motherhood is in the mix, childhood encouragement to dream big is countered by persistent traditional stereotypes of what motherhood should look like.

As Lydic said on The Daily Show, mom shaming isn't new. Plenty of parents are used to fielding unwarranted and unwanted comments from friends, family members, and strangers. But now, the introduction of social media into the parenting landscape ensures that moms are both more accessible and more vulnerable than ever. An invasive, in-person comment from an acquaintance at the grocery store is much easier to dismiss than hundreds or even thousands of comments accumulated on the Internet. The discussion doesn't even need to be about one's own child to be personally impactful: when criticism goes viral, it establishes and perpetuates unspoken standards, slowly reestablishing limitations on motherhood that women worked for decades — and are actively still working — to destroy.

A narrowed stereotype of what it means to be a "good mom" is just as harmful for moms-to-be. Laura Perlongo's pregnancy announcement offers an example. The freelance creative and girlfriend of Catfish producer Nev Schulman wrote a letter for ATTN describing the pain of hearing friends react to her pregnancy by questioning her readiness:

I was heartbroken. It’s not that I didn’t understand where they were coming from. I’m a career-driven girl who did all the things to suggest not ‘settling down’ until my late thirties. I’m a kidult for lack of a less obnoxious term. I don’t even have curtains. Even in my own version of adulthood, I’m a poor excuse for an adult. But did that mean I was supposed to wait until I’m closer to 40 to ‘throw my life away’, as one (mid-thirties) co-worker suggested[?]

Perlongo likened their reaction to that which would accompany the announcement of a "terminal illness." Unfortunately, her friends' aversion to motherhood makes sense in context. Though moms are allowed to be quirky, independent, bold, and multifaceted on television, the epidemic of mom shaming makes the "right" way to parent seem more constraining than ever.

Motherhood can be deeply moving, extraordinarily empowering, and absolutely life-changing, but motherhood is only one facet of womanhood and being a human. Despite long-held social standards and traditional taboos, there is no one "right" way to be a mom. But in order to ensure that every woman experiences the freedom she needs to raise her own kids well, it's essential to shut down mom shaming. When one mom's innocuous decision is criticized, all moms absorb the influence of public opinion. Until the Internet can accept that customized motherhood is a good thing, it's more important than ever for moms to stick up for one another.