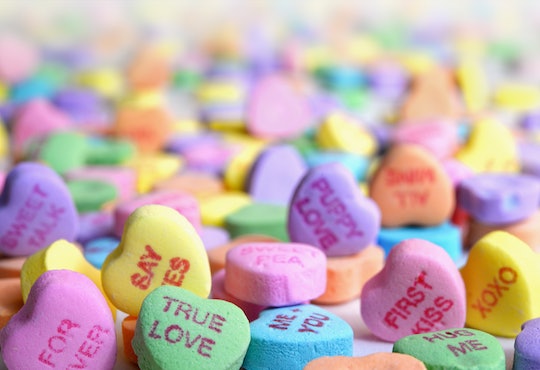 You Should Celebrate Galentine's Day With Your Kid

Leave it to Leslie Knope to give us all the greatest solution to all your Valentine's Day woes: Galentine's Day. According to NPR, Knope shared the brilliance of her made-up holiday in Season 2 of Parks and Recreation, when she explained that each year on the day before V-Day, she gets together with her girlfriends, "and we just come and kick it, breakfast-style. Ladies celebrating ladies. It's like Lilith Fair, minus the angst. Plus frittatas." That's obviously the best idea ever, but it doesn't just have to be about ladies. Here's why you should celebrate Galentine's Day with your kids, too — because what better way to bond with your offspring while simultaneously teaching them to avoid the commercialized trappings of Valentine's Day than with a breakfast-food, friendship-celebrating love fest?

Galentine's Day might not be an official holiday, but in a lot of ways, it's totally preferable to the real ones. Where Valentine's Day and traditional holidays have pretty much all been co-opted by people trying to profit from perpetuating unrealistic messages about love and romance and gifts and Instagram-perfect #relationshipgoals, Galentine's Day is a chance to celebrate what really matters: friendship, real, not-on-a-pedastal love, and, uh, food. And while it's of course completely fine if you want to keep Galentine's Day a girlfriends-only affair (that's important too!), including your kids in a Galentine's Day celebration can be super valuable for so many reasons.

Let's face it: Valentine's Day is only really ever truly great for the people who sell you overpriced flowers and greeting cards. If you're in a romantic relationship, Valentine's Day usually means that you have to attempt to organize a meaningful (and often expensive) night out to profess your love — and that, often times, one or both of you might end up disappointed thanks to the huge expectations piled upon the holiday. And if you're single? Valentine's Day can just end up making you feel unnecessarily inadequate for not having a partner to organize an expensive and potentially disappointing night out with (even if, really, you're quite happy being single the rest of the time). Pretty lose-lose, honestly.

Despite these pretty significant pitfalls, Feb. 14 is a day that even young kids are encouraged to celebrate enthusiastically — even though it's technically meant to be an adult holiday. My own 4-year-old twins are already beyond excited to hand out the boxes of "love cards" they've picked out for their kindergarten classmates during their Valentine's Day party tomorrow, even though they didn't even know what Valentine's Day was a week ago. And inevitably, they'll continue to look forward to swapping cards and heart-shaped chocolates and lollipops with their friends in the years to come, until eventually they get old enough to start dreaming of receiving romantic gestures from their crushes, teen magazine-style.

Of course, there isn't anything inherently wrong or bad about looking forward to Valentine's Day, or about daydreaming of the kind of romantic love we all see on TV and in movies. In fact, it's sweet to think that, despite it's trappings, Valentine's Day is a holiday meant to be an entire day dedicated to celebrating love. But now, thanks to Galentine's Day, we can also give our kids a way to celebrate love that isn't just of the romantic teddybears-and-heart-shaped-chocolates variety. Instead of reinforcing the message of Cupid and secret admirers, Galentine's Day means we can celebrate the importance of platonic relationships that have nothing to do with romance or sex — aka, the kinds of relationships our kids won't always see front and center in the media.

In her 2010 book, The Twisted Sisterhood, author Kelly Valen looked at the dynamics of female relationships, analyzing data collected from more than 3,000 personal interviews with women about their friends. In an interview with O, The Oprah Magazine, Valen said that what she found was that as many as 88 percent of women interviewed "reported feeling an undercurrent of negativity among females," and that, in many cases, that negativity can begin as young as 4 or 5 years old. What's more is that, despite the benefits women can gain from having solid female relationships in their lives, Valen said that the negative interactions many women experienced growing up has meant that "many women reported [in the survey] that to this day they avoid groups of females—book clubs, the PTA, Mommy & Me."

Sure, Galentine's Day isn't magically going to undo the reality that, for some reason, things like competition, jealousy. and betrayal have somehow come to be a part of many young girls' understanding of what female friendship involves. But showing your kids that you value your girlfriends and that you prioritize that support network in your life seems like a good way to model the kinds of healthy relationships you'd probably like to see them form, too.

Navigating what can sometimes feel like the minefield of female friendships can definitely be tough (ask anyone who has ever had an encounter with a "mean girl" in her life), but celebrating female friendships on Galentine's Day isn't just a good thing for our daughters. That's because, as difficult as it can be to find tried-and-true girlfriends, we're still largely receptive to the notion of Galentine's Day. And while I could totally be wrong on this one, I can't exactly see a bunch of men coming together over a meal on "Dudentine's Day" to celebrate how much their friendship means to one other.

As the mom of boy/girl twins, it makes me kind of sad to know that, while my daughter can enjoy having a female bestie whom she can hug, who she can write notes to in class, or cry to when she's sad (even in kindergarten, she's already found a BFF whose hand she holds as they sit in circle, and whom she hugs goodbye at the end of the day), my son probably doesn't have a lot of time left to hug his buddies or direct any affection their way before he learns that it's actually something he should be embarrassed about. And whether we realize it or not, the lack of healthy, platonic touch in boys' lives can cause negative effects that are entirely avoidable and unnecessary.

In an article for The Good Men Project, Remaking Manhood author Mark Greene discussed something he called "touch isolation" among boys, and argued that it is hugely limiting to their development. Greene noted that, while both boys and girls generally receive the same amount of physical touch and affection as babies and toddlers (something that is absolutely key to their development) "that contact often drops off for boys when they cease to be toddlers," at which point they're usually taught a much different, and much more problematic, message:

Boys are encouraged to 'shake it off' and 'be tough” when they are hurt. Along with the introduction of this 'get tough' narrative, boys find that their options for gentle platonic touch simply fade away. Mothers and fathers often back off from holding or cuddling their young boys. Boys who seek physical holding as comfort when hurt are stigmatized as cry babies.

That honestly might not even seem so horrible to some (after all, there really are still many parents who believe that they are doing their sons a favor by teaching them not to cry after a certain age — at the very least so that they won't get bullied or picked on by others), but as Greene pointed out, those lessons can have unintended consequences for them as adults. After all, even if a boy isn't shedding tears, it doesn't mean he won't still need a way to express how he feels, for better or for worse:

By the time they are approaching puberty, many boys have learned to touch only in aggressive ways through rough housing or team sports. And if they do seek gentle touch in their lives, it is expected to take place in the exclusive and highly sexualized context of dating ... In a nutshell, we leave children in their early teens to undo a lifetime of touch aversion and physical isolation ... It’s no wonder our young people face a epidemic of sexual abuse, unwanted pregnancy, rape, drug and alcohol abuse.

Again, including your little boy in your Galentine's Day celebration isn't going to singlehandedly make up for the fact our culture has internalized homophobia, and it won't automatically prevent drug abuse and rape. Our boys are still likely going to learn that it's weird or wrong for males to interacts with each other in the same kind of nurturing, affectionate way that women often do (hugging, kissing, telling each other we love them, etc.). But it will at least show them that it's a world that can and does exists — and one that they don't deserve to be automatically excluded from just because they happen to identify as men.

At the same time, Galentine's Day doesn't have to be about challenging gender roles or modeling healthy relationships either — it could just be a fun day of eating frittatas with your besties, because, uh, that's awesome. But given that there are so many valuable messages we can send our kids by celebrating healthy, platonic friend-love, including them in your Galentine's Day festivities seems like a really, really good idea.