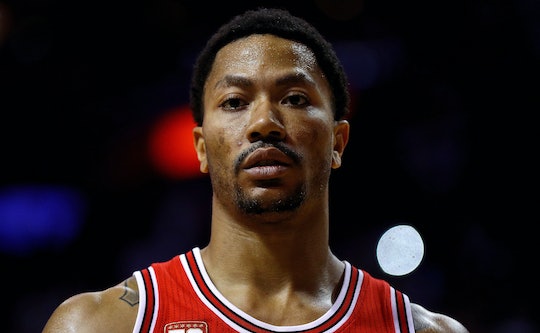 Why You Should Know About The Derrick Rose Rape Allegations

Ultimately, whether or not a defendant is guilty of sexual assault hinges on one crucial factor: consent. Did the alleged victim agree to have sexual contact with the defendant, or was he or she capable of doing so? But one ongoing rape case that pits a professional basketball player against his ex-girlfriend is emblematic of the public's propensity to attempt to discredit alleged victims by questioning everything from their motives to how they present themselves on social media, to their past sexual experiences. It's victim-blaming at best, and it's exactly why survivors' advocates and rape apologists alike should know about the Derrick Rose rape allegations and the bare facts behind them.

Rose, now a 27-year-old point guard for the New York Knicks, is enmeshed in a legal battle with a woman who claims that he and two friends drugged and gang-raped her in August 2013. The woman, who has not been identified by name in legal documents associated with the civil case, is suing the three men, whom she claims broke into her apartment after the group had been partying together at Rose's Beverly Hills home. The accuser claimed to have been unconscious at the time of the alleged assault. Rose does not deny having had sex with her that night, but maintains that it was consensual.

That self-defense is not surprising even when much of the evidence — such as the fact that the reported victim did not respond to 11 texts and calls from Rose after he arrived at her apartment, indicating that she may, in fact, have been unconscious — allegedly contradicts it. And it's one that the public, in cases like this, is eager to believe: How could this successful athlete have raped someone? the reasoning goes. It's much more likely that she was asking it, or that she's out for money!

That's the twisted logic and intensifies rape culture by shaming victims and discouraging them from coming forward and naming their assailants. It's the belief system that allows frustrating arguments — like the one Rose's defense team made in petitioning the court to use the alleged victim's real name in document, according to ThinkProgress — to fly in the court of public opinion, if not the court of law:

The notion that the alleged victim in this case is less likely to have been sexually assaulted because she had the audacity to publicly portray herself as sexual is ludicrous. It perpetuates the dangerous myth that a back alley rape of a pure, pure virgin is the only type of rape that men and women (who, in that much less likely scenario, are always strangers, which disregards the reality that three out of four rapes are perpetrated by someone known the to the victim) should be held accountable for. That's far from the truth. It's also untrue that just because a person agreed to have sex with someone once that he or she has granted that person free reign over her body in perpetuity.

Rose's team, for its part, maintains the athlete's innocence. In a statement to Romper, Rose attorney Mark B. Baute, wrote,

This is not a rape case, it's an extortion case, and the only victim is Mr. Rose, who is entirely innocent. The plaintiff had consensual intercourse with Nr. [sic] Rose for twenty months.

However, the implication that the alleged victim here forfeited her bodily autonomy when and if she had consensual sex with Rose (who, remember, allegedly brought along two friends when the trio allegedly raped her) may come off as disjointed in the eyes of a jury. So too might be the idea that the reported victim made up the story of the rape to get money from a famous athlete.

In October, a judge will determine who us telling the truth and who is lying in this case. In the meantime, it's dangerous to buy into narratives that focus more humiliating the alleged victim denying the validity of her claims based on her past actions than examining the evidence. Until the case plays out, perhaps it's best that the public remembers that all are innocent until proven otherwise — and that includes the alleged victim.